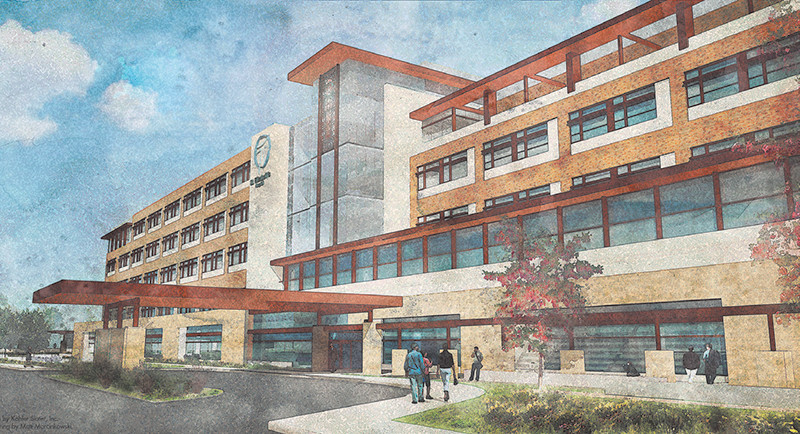 St. Elizabeth’s Hospital, in agreement with the Hospital Sisters Health System and the Hospital Sisters of the Third Order of St. Francis, is building a new replacement hospital and ambulatory care center in O’Fallon.
Construction is now underway on the $300 million hospital, located on 114 acres at Interstate 64 and Green Mount Road. Holland Construction Services of Swansea is working jointly with Alberici Construction of St. Louis to provide the construction management services.
The 353,000-square-foot facility will include 144 private patient rooms, an emergency department, state-of-the art operating rooms, modern birthing suites, an advanced intensive care unit, and inpatient rehabilitation. An ambulatory care center will provide outpatient services such as lab, imaging and therapy.

Foundation work began in August after initial soil improvement work was completed. Due to poor soil conditions, the engineers recommended that 2,200 rammed aggregate piers be installed to support the five-story structure.
Project Manager Jamie Gensits, a 19-year veteran of the construction industry, recently joined Holland Construction Services as part of the management team on the project.
“The St. Elizabeth’s joint venture team has a great mixture of talented people with similar project backgrounds to help make this a successful project for the owner and our project team,” says Gensits.
Architect Kahler Slater Inc. of Milwaukee designed the new five-story hospital. The exterior consists of a pre-cast concrete envelope with an inlaid brick and hand-laid stone feature at the front entrance area. The front of the building also features a curved wall at the entrance canopies that steps into the second floor of the southeast elevation. The cafeteria will be located on the fifth floor of the facility to give diners a scenic view.
St. Elizabeth’s Hospital is due to be substantially complete by August of 2017.

Benches are available for public placement

A new regional women’s leadership group, The “W” Network of Downstate Illinois, has been formed.
It is a continuing education and networking organization. Silvia Torres Bowman, director of Southern Illinois University Edwardsville’s International Trade Center, is laying the groundwork for the group and inviting women executives and entrepreneurs to take part.
A Metro East-based event for The “W” Network is being planned for later this fall on the SIUE campus. For more information contact Torres Bowman at sitorre@siue.edu or (618) 650-2452.

MASCOUTAH — The Illinois Metro East Small Business Development Center, in partnership with the city of Mascoutah and the Southwestern Illinois Chapter of SCORE, will hold an “Open House for Small Business Owners and Entrepreneurs” at the Mascoutah Visitor’s Center from 9 a.m. to 3 p.m. Tuesday, Oct. 13.
It is one of a series of such open houses throughout the region. Contact Jane Bagent for more information, jbagent@siue.edu or (618) 650-2929.