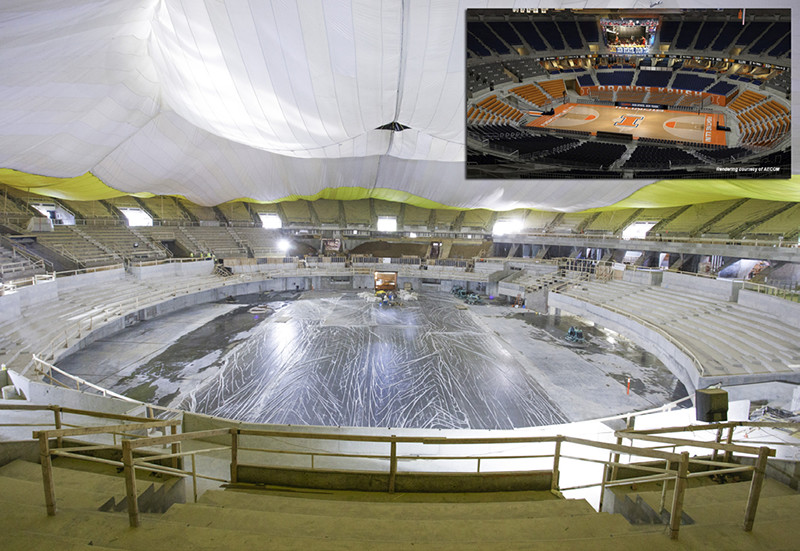 Construction continues on a six-phase 74,000-square-foot renovation and addition to the State Farm Center at the University of Illinois Urbana-Champaign. The $169.5 million project that began in December 2013 is anticipated to be complete by the end of September 2016, with each phase taking place around the basketball season.
Poettker Construction Co., headquartered in Breese, is the prime contractor for the concrete and general trades packages, totaling $22 million. AECOM is the designer of record and Turner/Clayco is the construction manager.
Home to the Fighting Illini basketball team, the State Farm Center opened in 1963 as the first concrete-domed sports structure in the world. The renovated facility will feature a mix of traditional features with upgraded amenities and technology to bring the facility up to modern NCAA standards.
Concrete work completed by Poettker involved self-performing the concrete footings and foundation work to match 8,350 cubic yards of new concrete to the existing 50-year-old concrete structure.
Removal of the existing court, concrete barrier wall and Level A permanent seating was necessary for installation of the new footings and foundation. The new court was poured at a lower elevation, which made room for additional permanent seating and new suites/club rooms.  Poettker crews worked two shifts of 50 men inside the concrete bowl structure in order to meet the accelerated schedule while maintaining quality on exposed concrete radius walls and
stepped seating.
“Our team successfully completed the interior exposed concrete work on schedule with superb coordination efforts amongst all of the crews involved,” on-site project manager Chris Poettker said. “We are continuing to work on the exterior concrete for the new additions, which is scheduled for completion in November 2015.”
Key features of the general trades package involve replacing the domed roof, adding state-of-the-art kitchen equipment services, and all of the interior finishes including furniture and signage/graphics.
Founded in 1980, Poettker Construction currently has 130 full-time employees and says it is committed to building relationships and buildings in the safest, most efficient and most conscientious way.