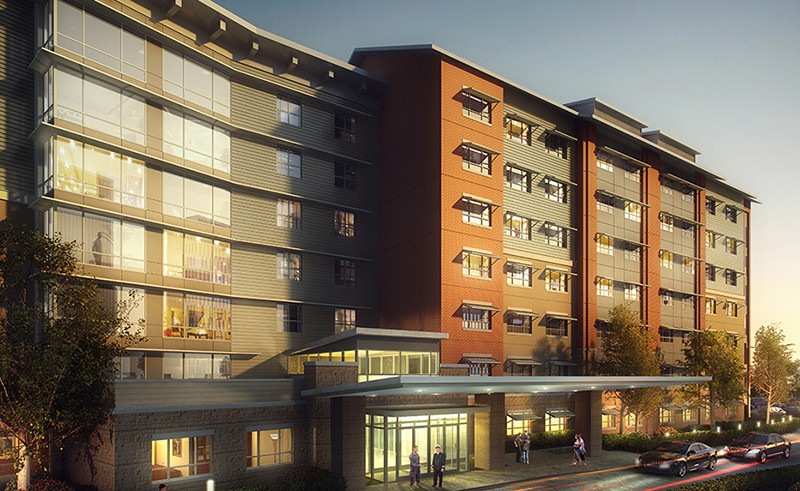 The Korte Company has begun work on a $46.3 million design-build contract to construct a new seven-story, 200-guest room Navy Gateway Inns & Suites hotel at Naval Station Newport in Rhode Island. The 103,831-square-foot project also includes the construction of a parking area on the adjacent Lawrence Field, designed for 175 vehicles.
When completed in April of 2017, the facility will be the central lodging facility for Naval Station Newport as well as the main check-in point for all base lodging. Additionally, the building will accommodate the majority of administrative, staff training, maintenance and guest services functions, including an on-premise commercial laundry facility.
The facility will be designed to achieve LEED Silver Certification per USGBC requirements.
“Every project has its own set of challenges, and this one is no exception,” said Jason Mantle, chief operating officer of The Korte Company. “The site itself is small, and in close proximity to the shoreline. Within the site, there will be a substantial amount of rock excavation that will need to take place. These parameters have certainly influenced our approach to the site-work phase of the project.”
“The scope of work also includes deep foundations, a necessity due to the geological profile of the area. In addition to the site itself, we will be dealing with the New England weather, which can be challenging, especially during the winter months.”
The design of the facility is oriented to blend the historic aspects of the area and surrounding buildings with a more modern architectural approach while capturing views of the Claiborne Pell Newport Bridge and the Narragansett Bay.
This is the U.S. Navy’s first Gateway Inn and Suites project, and the inaugural facility under the organization. It will establish the signature image for future projects.
The Korte Company, founded in 1958, is headquartered in St. Louis with offices in Highland; Norman, Okla.; and, Las Vegas. The company manages, on average, an excess of $200 million in annual construction volume.
The Korte Company builds for government agencies as well as the design and construction of health-care facilities, medical office buildings, warehouse/distribution centers, religious facilities, commercial buildings, schools, recreation centers and office complexes.