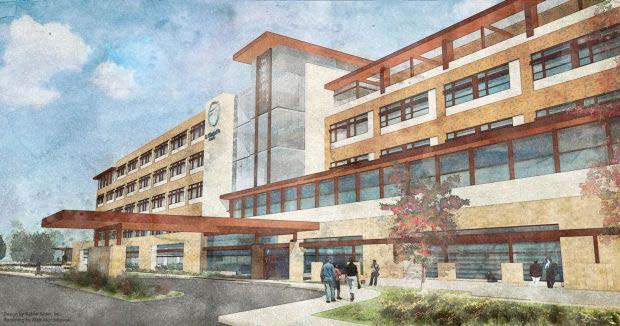 By ALAN J. ORTBALS
Ground was broken last summer on the new, $300 million HSHS St. Elizabeth’s Hospital in O’Fallon, Ill., but it wouldn’t have happened without tax increment financing, according to Ted Shekell, the city’s community development director. The desired site was severely undermined.
“Hospital officials told us that they would not build on that site with the undermining problem,” Shekell said. “It was clear that if we wanted the hospital to be there, then we were going to have to agree to correct it. We’re grateful we had TIF available to us.”
The Green Mount Medical Campus TIF, as it’s referred to, encompasses 165 acres. Created in 2011, its primary purpose was to enable the development of the hospital and associated medical office buildings by remediating the undermining — a $5 million expense.

Under the redevelopment agreement, the city agreed to pay for the undermining remediation and issued bonds to front the cost. This was a bit tricky, said city administrator Walter Denton, in that the hospital itself is exempt from property taxation and therefore would not create any tax increment.
The key to making it work was the medical offices which were taxable.
“We made sure that they were going to build enough taxable medical office building space to generate the incremental revenues necessary to retire the bonds,” Denton said. “We don’t usually issue bonds and we don’t pay up front for anything,” he added, “but we felt this was a big enough project and an important enough project that the City Council actually guaranteed the mine remediation up to $10 million. The actual cost ended up being around $5 million.”
Denton said that the hospital agreed to pay for any shortfall between the remediation cost and the increment generated but that’s turned out not to be necessary. St. Elizabeth’s is building more than enough taxable office space to cover the debt, he said.
As part of the project, the city will be rebuilding and widening Green Mount Road along with water, storm and sanitary sewers. The TIF district includes other properties that will be prime for development, Shekell said.
“The economic impact and spill over from the hospital will have extraordinary benefits to the entire community in terms of other businesses coming into town and jobs for residents,” Shekell said. “One of our goals has been to diversify our local economy so that we have good jobs where people who live in O’Fallon can work in O’Fallon. We think that this hospital and medical campus will be a great stimulus.”