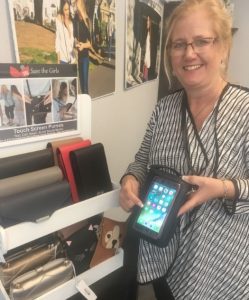 After surviving the Covid-19 pandemic which closed 95 percent of their retail outlets, Belleville’s Save the Girls had additional struggles with shipping issues, delays, exorbitant expenses and now a looming economic downturn. Save the Girls found a new partnership to allow them and their retailers to thrive under these difficult circumstances.

The (Digital) Solution
The answer came from CommentSold, a digital marketing platform that among other things, allows live selling via social media, merchants’ own websites and their CommentSold branded mobile apps. “We found our own direct customers who used CommentSold sell more units in a shorter time than other stores,” said Save the Girls founder and president Tami Lange. “Since it worked so well for them, we informed our other customers about the platform so they too could see similar success.” Lange approached one of their top-selling and original retailers, Southern Necessities, with the idea to use CommentSold.

The store’s manager, Stefanie Hill, granddaughter of the owner Ann Hill, started pushing social media to draw customers into the store. Smith argued, “It was social media, old vendor relations and a bit of grit that kept us going through the Covid years.” Smith continued, with a recession looming, “we are now ready to up our game with CommentSold to get us through another year.”

High Tech Tool for Smaller Retailers
According to Lange, “smaller retailers, female-owned enterprises, and start-ups need effective, affordable ways to reach customers and Southern Necessities was just one such example.” Lange continued, “the pandemic got the public more accustomed and even preferring online sales. This is the next evolution that combines the production values and staging of live television with the immediacy of social media.”

Affordable
As traditional shopping channels are expensive, few retailers can afford them. CommentSold is inexpensive and accessible for merchants and customers. “Anyone with a Facebook page or who has ever bought anything online can manage this with ease,” Lange said. Customers can add items to their shopping cart and purchase items by simply commenting “sold” on the live video sale or post. In addition, CommentSold instantly sent invoices via automated comment replies, Facebook Messenger, or email to Southern Necessities customers in real time.

About Save the Girls
Save the Girls manufactures and sells purses with smartphone pockets to keep phones accessible and fully functional without taking them out of the purse. Most importantly, women can use their smartphones and tablets without placing those devices against themselves. Lange founded the company after watching her sister-in-law use her bra as a cell phone pocket even while suffering from Breast Cancer. Lange’s company donates 10% of profits to Breast Cancer Research.

The Illinois Business Journal published a full feature story on Save the Girls, which can be viewed here.

PHOTO: Tami Lange shows one of her “Save the Girls Touch Screen Purses,” which are designed to carry a cellphone that can be used through a protective cover without having to be taken from the purse. IBJ file photo/Dennis Grubaugh