It’s been quite a two-year stretch for Tami Lange. The Belleville businesswoman enjoyed a trip to Hollywood, a product promotion on QVC, and more than a million dollars in sales of a specialty purse that was borne of inspiration. 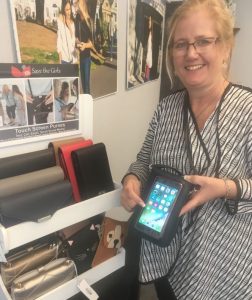 All because two daughters lost their cellphones — one in a state park, the other in a toilet.

“Two were gone in the same week,” Lange said. “I was not a happy mom.”

Though it might not be your normal way to start a business, the phone crisis rapidly turned productive beginning in July 2017 when Lange mentioned the tale to her sister-in-law while they were enjoying a long family reunion in Branson, Mo.

“I never lose my phone,” her sister-in-law responded, and Lange watched, astonished, as the other woman whipped the device from her bra.

Lange recalled chastising her: “Haven’t you ever watched Dr. Oz?” she said. The famed TV doctor has long advocated against keeping cellphones in bras because of radiation concerns. The sister-in-law, at the time, was being treated for breast cancer.

Lange said she spent the rest of that day, researching ways to keep her own daughters from losing their phones and not resorting to her sister-in-law’s practices. She was looking for something both safe and secure. She found nothing online that any of the women could use.

Ingenuity set in the next day, while the family was canoeing. Lange had her phone in a waterproof bag and found herself texting through the bag. It occurred to her that a purse could potentially be rigged up the same way.

The Branson vacation and the foundation it laid for Lange’s business plans were only just beginning. She immediately drew up a rough plan for a small purse with a carrying strap and a plastic-covered pouch that could allow a cellphone to be used while still in a handheld manner.

She sent the idea to an international bid website called Alibaba.com. The next day — while she was still in Branson — she had 16 factories bid for the right to make her purse.

Thus, was born a business that has since taken countless hours, enlisted many family members and gained worldwide attention.

They’ve evolved through prototypes and changes to materials, but the “Save the Girls Touch Screen Purses” have been a comparative success from the start.

Before that first Christmas, she had 100 retailers buying the purses. Now, she has 2,000.

The name “Save the Girls,” is a play on both the connection with her daughters and as a salute to the fight against breast cancer. Lange donates 10 percent of profits to the Breast Cancer Research Foundation.

From the beginning of her effort, Lange admits to engaging in trial and error to get things right, but her background in business helped.

“I felt like I’d run into a wall and turn and run into another wall, until I found the right thing,” she said. “I was basically like a Pac-Man game.” She stuck with it, though.

“I’m very proud of her,” said husband Jon, a Lutheran pastor who helps with the business. “She gets a lot of who she is from her father, Jody.”

Joseph “Jody” Trover built the Landshire sandwich business in Belleville before selling it to his family. Eventually the business was sold to AdvancedPierre Foods and later to food giant Tyson.

Tami Lange was marketing director for her father and won national awards in the process for product creativity. The family retained the former Landshire buildings on West Main Street. Save the Girls is based in Landshire’s old human resources offices and the inventory is stored in a former lumber company adjacent to the offices. Distribution takes place at the location as well.

The first real manufacturing foray took place in September 2017 when Lange flew by herself on a 16-day trip to China to meet with factory representatives.

“When I first launched, no U.S. manufacturers would call me back. Now, I do have some leads on U.S. manufacturing, and I will be contacting them. In truth, it’s hard to manufacture in the United States because all the materials I need are made in China.”

By moving more of the production to the U.S. she risks higher labor costs and the possibility of tariffs, “which scares me to deaths,” she said.

She has also flown to India and plans a trip Cambodia.

“My personal goal is to make more of my own products, but I need to sell more product to make that dream a reality,” she said.

No child labor has been involved in any of the production, she said, noting that all the big purse brands in the United States are also made in China.

The purses retail between $28 and $50. All have the touch screen pouch and come in 15 styles and multiple colors. She said she has around 60 individual products.

They are designed so women can carry credit cards, passport and receipts, and have options to include such things as sunglasses or two phones.

“Everything is designed primarily phone first, then other options — more space, less space, wallet size, etc.,” said Lange, 51, who is from Belleville but now lives in Edwardsville.

Locally, businesses such as Don Rodgers Ltd., Basket Case, Eckert’s and Ben’s — all in Belleville — offer the items. National retailers, as large as the chain Hallmark stores, are involved, as is Lori’s Gifts, the nation’s largest hospital gift shop outlet, with 200 stores.

The products are being sold in all 50 states, in no short measure due to Lange’s marketing acumen, which includes advertising at trade shows, the social media presence she built up and the people she got involved in promotions. She has made frequent appearances at places like AmericasMart Atlanta, one of the biggest wholesale trade centers in the world, and other exhibitor shows. That’s attracted many stores to offer her products. She has a master’s degree in marketing from Saint Louis University and an undergrad degree at Valparaiso University in Indiana.

“We did over a million in sales our first year. And we were out of stock — for about three months because a surge we were unprepared for,” she said.  The first sellers restocked and new ones came on board.

The good news keeps coming for the business.

Save the Girls was invited to invited to the Oscars this year, and products were included in a gift bag at the Rafi gift lounge as part of the filmmaking pageantry.

“We were able to talk to about 250 actors and actresses who took our product. Their pictures on our websites,” she said. Among them are actors Lilan Bowden, Paul Greene and Kearia Schroeder.

The company also had a presence at this year’s Billboard Music Awards, although Lange was not able to attend.

One of the biggest coups occurred when Lori Greiner, an investor on TV’s reality show “Shark Tank,” touted the purses during an appearance on the QVC shopping channel.

“She ran out of product in minutes,” Lange said.

The owner says she tumbled onto a good idea but one that also fills a need.

“People over 50 don’t have a lot of pockets in their clothes. Teens don’t always. Phones have gotten so big they wouldn’t fit even if you have one,” said Lange, who adds she doesn’t want to focus on big bags.

“I prefer for people to carry it all day long, and if you put it in a big bag, that takes away from that. Our phones always go with us. The big bags don’t.”

Given the success she’s enjoyed is there any way she could have predicted any of this?

Maybe, since she was getting good response almost immediately.

“I did some research just asking people. I was standing in line at Target, texting, and the lady next to me asked, ‘Where did you get that?’ The gal at the cash register took a break and came out to the car and bought two.

“I thought, ‘I sold three purses by not trying.’ If I tried, it would go even faster.’’

More than 200,000 have been sold so far, but Lange says she can “only grow so fast.” She’s slowed the growth by controlling some of the stores she goes into. She has not yet hired rep groups on the West Coast in an effort to keep things in order.

Her goal is to ship purses within 48 hours, to both wholesalers and retail outlets, and retailers aren’t accustomed to getting products that quickly, she said. Because of that she keeps a large stock in her inventory.

More than $3 million in revenues are anticipated this year.

All of the Langes’ five children have worked in the business but have advanced to college or beyond.

The two daughters whose cellphone misadventures led to the creative idea, Katherine and Rebecca, have an honored place in a poster prominently displayed on an office wall. Their pictures have accompanied many of the marketing materials that have been compiled in the last two years.

A third daughter, Elizabeth, works for a cruise line but occasionally returns home to work at the business.

Today, Tami Lange has nine employees, but in July 2017 it was only herself, until she enlisted a girlfriend, Janet Murphy, who worked with her early on. Other employees and family members then joined up.

“For the first year I’d wake up at 6 and go to bed with a computer in my hand and pass out,” she said.

About a year ago, she hired Angie Norrenberns to handle customer service.

“She took a big burden off,” Lange said.

She also gives credit for assistance she’s received from Town and Country Bank.

More information about Save the Girls can be found on the business’ Facebook page.

PHOTO: Tami Lange shows one of her “Save the Girls Touch Screen Purses,” which are designed to carry a cellphone that can be used through a protective cover without having to be taken from the purse. She’s sold in excess of 200,000 units. IBJ photo/Dennis Grubaugh

Editor’s note: This story is from our monthly print edition. See the rest of the issue at: