EDWARDSVILLE — Madison County Board Chairman Kurt Prenzler is commending the work of Animal Care and Control and rescue groups for saving more than 4,000 cats and dogs the past four years.

“When I took office one of the goals on my administration was for Animal Control to become a ‘no-kill’ shelter,” Prenzler said. “At that time more than two-thirds of the cats and one-third of dogs brought in were put down. Now more than 90 percent of the animals are saved.”

Prenzler commends the hard work of Animal Control Manager Katherine Conder and the animal control staff. He presented a certificate of appreciation to Conder on Thursday for her work in helping to save the county’s healthy and adoptable animals.

He also present certificate of appreciations to Metro East Humane Society and Partner’s for Pets. Between the two rescues they have helped save the majority of the cats and dogs brought into animal control.

“Rescuing animals is a lot of hard work,” Prenzler said. “Thanks to Katherine, the employees and the rescue groups and organizations the county reached its goal and continues to do so even during these difficult times.”

In March 2017, the County Board passed a resolution for the county to become no-kill by Dec. 31, 2021. Prenzler worked with Ledy VanKavage, a senior legislative attorney with Best Friends Animal Society, on the resolution.

“We’ve come a long way since the resolution was passed,” Prenzler said.

He said the numbers speak volumes for what has taken place.

“I think Madison County reaching no-kill before 2021 is due to the strong leadership of the administration,” VanKavage said.

She said it shines a “bright light” to other communities on what can be done when people work together.

The number of dogs and cats saved since:

This year there have been 602 animals saved. For more information, animal control statistics can be found on the Animal Control’s website at https://www.co.madison.il.us/departments/animal_control/statistics.php.

Conder credits the success due to the work done by rescue groups.

“It takes team effort to do what we do,” Conder said. “Without the rescues we wouldn’t be able to save lives.

She said policy changes helped the county reach its goal. Animal control increased hold times from three to 10 days; allowed rescue groups and organizations with a U.S. Department of Agriculture license to pick up animals for adoption; implemented a foster kitten and cat program; and worked with a local rescue for its feral cat relocation program, also known as the barn cat program.

“Every healthy dog and cat is finding its way into a home,” Conder said. “It’s what they deserve.” 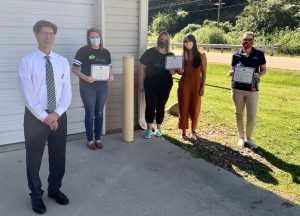