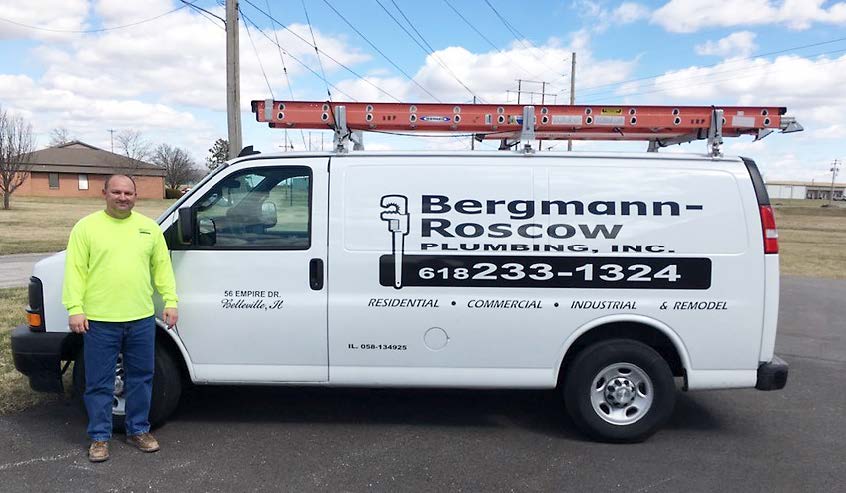 By DENNIS GRUBAUGH
E.J. Roscow started off small, built a multi-million-dollar business, and gives his employees credit for the growth.
“The success we have had is because of our employees — 100 percent. Our people are the best in the trade, from our foreman all the way to the office and warehouse staff,” the president and owner of Belleville-based Bergmann-Roscow Plumbing Inc. said.
The company began in 2007 with a partnership of Roscow and Tony Bergmann.
“We started off as residential service guys and worked our way up into commercial,” Roscow said. “We left our old jobs to do our own thing.”
That decision led to a business that now does $9 million to $10 million in projects each year, working with some of the largest general contractors in the region.
Bergmann retired Jan. 1, but Roscow, at 45, figures to work several more years and is intent on growing the company.
“I’ve been in the trade for 27 years, and I’ve got a lot of contacts,” he said.
Roscow started in the industry right out of high school. Once he got into the union, he did a five-year apprenticeship. His uncle helped him get into the business and he began by working the warehouse and doing deliveries.
“I basically got to know a lot of general contractors by getting in and doing some work with them, and the next thing you know, here we are. We’ve got over 40 employees in our company,” he said.
Today, he is a plumber out of Local 101 in Belleville, which has about 225 members, and commercial plumbing is the company’s mainstay.
“You name it, we do it — tilt-up building construction, several hospitals, schools, auto dealerships, senior living, assisted living. We’ll do plumbing projects that are $2 million to $3 million alone,” said Roscow, who grew up in and still lives in Red Bud in Randolph County.
The company is based at 56 Empire Drive in Belle Valley Industrial Park off Green Mount Road, not far from Eckert’s orchards.
Any competitive edge is based on the employees’ efforts, he stressed.
“Our general contractor partners trust and rely on us to get the jobs done professionally and on time, which we do every time. I have been told repeatedly by several GC’s that we are always the least of their worries when we are on their projects and that makes me feel good that they trust us. This trust is what gets us the repeat work with the GC’s in the area and makes us the plumbing contractor of choice.”
The company’s biggest project was a recent one — HSHS St. Elizabeth’s Hospital’s medical office building.
“We did all the plumbing on that building and all the medical gas piping within the hospital. That total project was about $4 million worth of work. It took almost two years.”
Currently, the company is working on a $2 million project to gut and remodel the Founders Hall at Southern Illinois University Edwardsville. Work is also going on at the World Wide Technology project on Illinois 255 and the new BJC Siteman Cancer Center in Shiloh.
“We typically work about a 50-mile radius of the Belleville area,” he said of the Illinois-licensed company. Continuing education is required each year for plumbers to keep their licenses intact.
“We’re always looking to grow the company and we’ve got the means and methods to do it,” he said. “Right now, I’ve got four plumbing estimators and one pipefitter estimator. We’ve got great employees here and great foremen out in the field.”
Roscow handles mostly administrative duties these days, but he’s not afraid to go into the field when needed.
He and his wife Tammy have two children 12 and 17. He’s been a voluntary firefighter for 20 years and coaches his daughter’s softball team and his son’s baseball team.