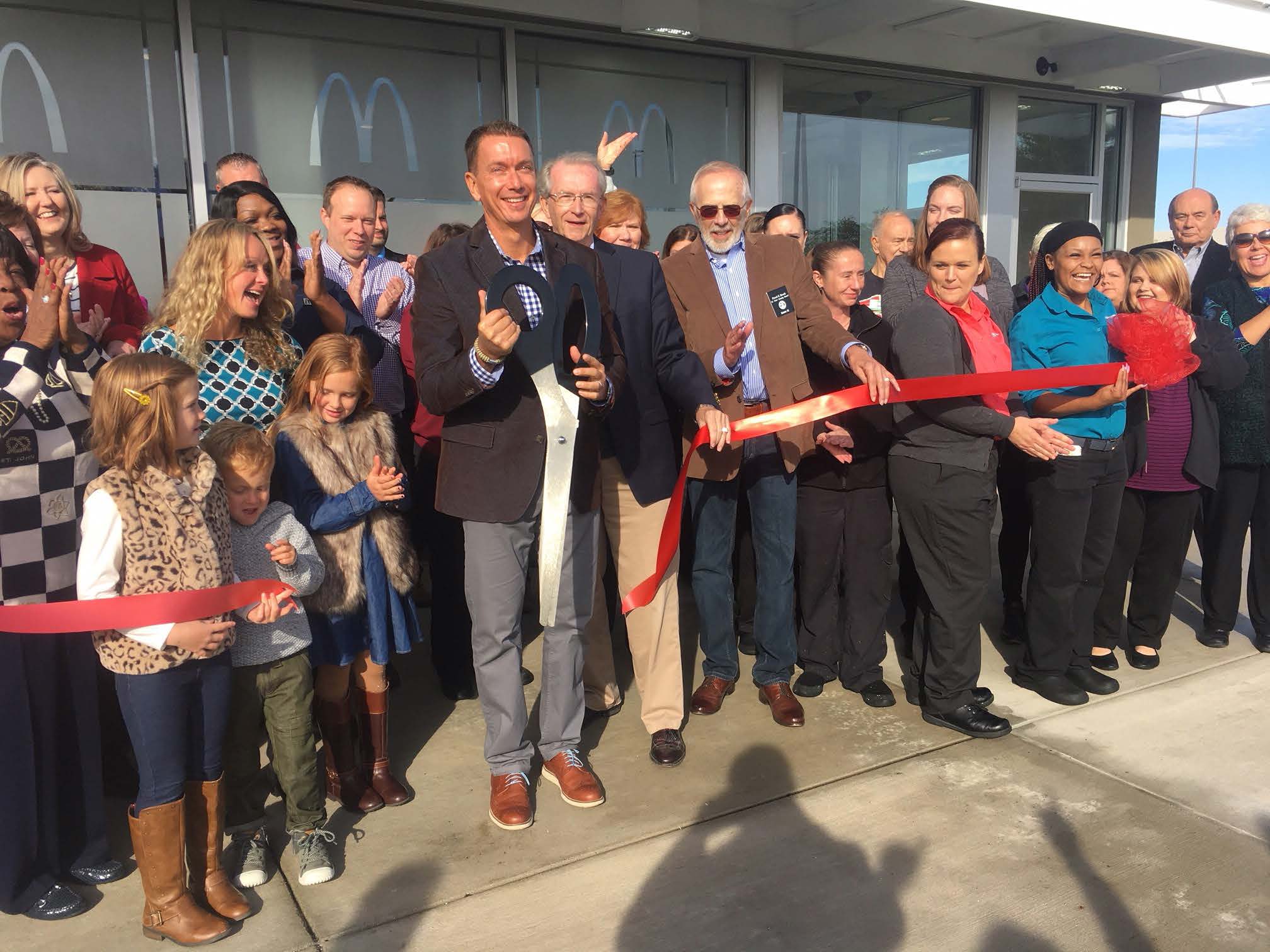 By DENNIS GRUBAUGH
A number of McDonald’s restaurants in the Metro East area are among thousands across the country that have or soon will be transforming their locations for the next generation of fast food connoisseurs.
About $317 million is being reinvested in Illinois, affecting a little over 400 restaurants.
It’s all aimed at improving the experience of the customers, crew and management — from the outside décor, to new finishes, lobbies and technologies, such as the kiosks from which customers can self order. Another feature being added is mobile order and pay.
Gene Stanford, who owns nine locations in Southwestern Illinois said the investment is aimed at capturing new and old customers. He and McDonald’s Corp. are jointly putting a little more than $1 million back into his restaurant location at 1610 West Highway 50 in O’Fallon, Ill., which was marked with a chamber celebration and flag raising this past month. The money includes an exterior remodeling and upgrading of the interior, the bathrooms, ADA access and interactive technology.
“Every McDonald’s that I own either has already or will be touched by the end of 2020. It’s a significant capital reinvestment. Several million dollars,” he told the Illinois Business Journal.
The transition is part of what McDonald’s calls its “experience of the future.”
“The point is giving the customer the option of how they want to interact with us,” Stanford said. “As a society we are busier than ever, we may not have the time to sit in the drive through when we’re wanting to get somewhere with the family. It’s easier now than ever, with the technology, to order in advance and have the food ready when you show up.”
Customers can use their smartphone and place an order when they are about three minutes away from the restaurant, Stanford said.
“The restaurant will receive that order and make your food fresh and you choose where you pick it up — whether it’s curbside, dine in with table service where you’ll see numbers on the tables, or the traditional come through the drive through and get your food,” he said.
Stanford, who professes to being “a Quarter Pounder With Cheese fan,” touts a new fresh hamburger introduced by McDonald’s.
“The fresh beef is never frozen or put in a container for storage. It literally goes from the grill to your sandwich,” he said. “There is lot to be excited about.”
Stanford’s restaurant ownership covers a wide swath of Metro East, including three stores to the north — Hillsboro, Carlinville and Jerseyville — and several along U.S. Route 50 from Caseyville to Lebanon.
He got into the business via family in Chicagoland.
“I’m considered a third-generation owner/operator. My wife’s grandfather (Peter Cinquegrani) started in 1956 in Joliet, Ill. My mother-in-law is an owner/operator still to this day,” he said. “Emily and I got married, and shortly after that my McDonald’s journey began.”
Stanford, 44, starting as a “fry guy,” occasionally burning his head on the fry station. It took him about five years to become an approved owner/operator and purchase his own location in 2011.
He operated in the Chicago area until 2014 when he sold his restaurant and moved to Troy, Ill. At that time, he bought his three northernmost restaurants from an operator who was retiring.
He said some of the moves made by McDonald’s — food quality, menu selection and new services — are aimed at luring a new generation of customers, as well as re-attracting some of those who might have gotten turned off along the way.
“The amount of information that’s available today and peoples’ concern about their overall health and well-being really aligns with the way McDonald’s has chosen to go, by removing preservatives and artificial flavors and colorings out of their food and going to the 100 percent fresh beef and addressing the changing mindset,” he said.
Stanford has not ruled out further expansions of his business, which he operates under the name of Avodah Management. Avodah is a Hebrew word for blessing. Stanford picked that word not because of any religion but because of his background as a linguist in the U.S. Army.
“Language has always been somewhat fascinating to me, and the Hebrew language is pretty unique,” he said.