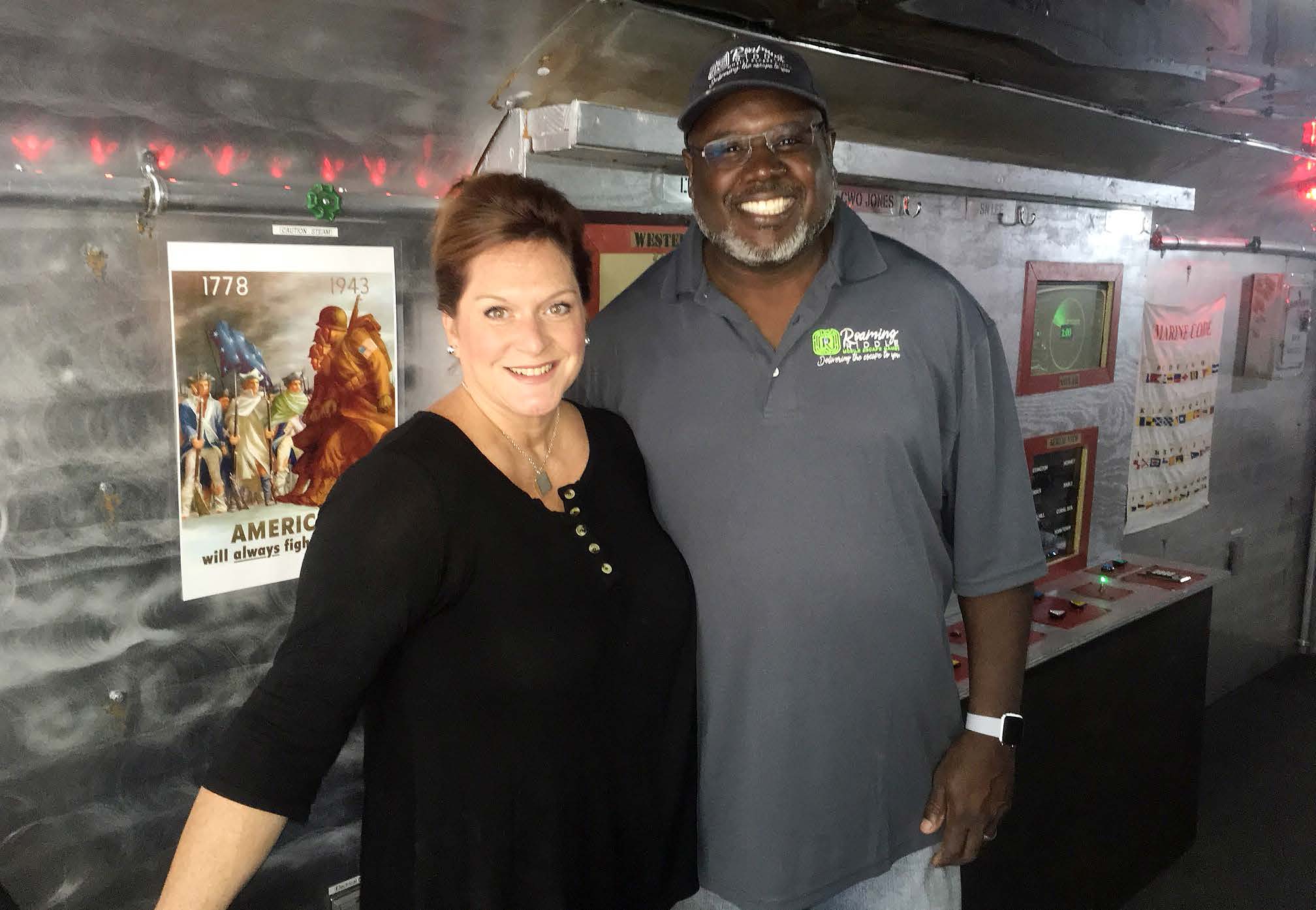 By DENNIS GRUBAUGH
Some businessmen don’t have a clue. Ray and Cami Perkins have a 32-foot trailer full of them.
In an age when escape room businesses are seemingly opening in storefronts in every town around, the O’Fallon, Ill., couple are an enigma inside a riddle wrapped in a mystery. They take their business on the road.
Roaming Riddle Mobile Escape Games is a rare escape room on wheels. It’s elaborately adorned, inside and out, bedecked at the moment in a submarine theme. Passengers climb aboard and have to work through a series of clues to win the game.
It’s hard to miss the giant trailer, which for the last two months people have been seeing at festivals, churches, business functions and such. The vehicle is like a rolling, multicolored billboard, giving only the barest clue as to what’s in store inside.
“We take you back to 1943 to World War II,” Ray Perkins says playfully. “A group comes on board and they are new sailors in the U.S. Navy. They’ve been assigned to this submarine, the USS Escape.”
In the current game scenario, the sub is submerged 200 feet down, and enemy ships are afloat overhead. The sub is running out of power and rising to the service. Somewhere on the submarine is a backup battery needed to rescue the mission. Passengers have limited time to get their act together.
Algorithms, puzzles, riddles — everything one needs to get from clue to clue to clue — are found inside the trailer. Visitors don’t necessarily have to be geniuses, but they do have to be observant and it’s best if they act as a team. A little luck doesn’t hurt.
Escape rooms have been pleasant diversion from reality for about a decade in this area, but they’ve also served a  purpose for corporate officials wanting to engage their workers in meaningful team-building exercises.
In Metro East, escape rooms have recently opened in Alton, Belleville, Collinsville and elsewhere — but each is a brick and mortar operation.
The Perkins family was exposed to their future a few years ago when they visited an escape room in Nashville, Tenn., with all three of their children. They enjoyed that adventure and many similar ones since.
A World War II era picture of a bomber pilot out on the town in Hollywood adorns one wall of the escape room. The man in the picture is Cami’s grandfather.

Ray and Cami were each raised as U.S. Air Force military brats, ending up at Scott Air Force Base and eventually at O’Fallon Township High School. Perkins is a mostly retired attorney who once worked in the powerhouse firm of Winston & Strawn in Chicago.  His wife retired from clinical research administration in health care. A few years ago, they reached a point when they wanted to spend more time with their family and a mobile escape room seemed like a way to make quality time, Cami said.
Some research put them in touch with a Chicago businessman who custom built the inside of the Roaming Riddle vehicle. Later, a Belleville company provided the exterior look.
The trailer has underwater sound effects — the haunting siren of a pod of whales, for instance. And it’s got the general feel of cramped quarters like one would experience in a submarine. Still, there’s enough room for 10 people at a time to participate in the game. The trailer is 8 feet wide inside.
Players can come and go from the trailer at will — unlike a locked-room mystery, where you have to find a key to get through an exit.
In this version, participants are trying to accomplish a mission before time runs out.
The bells and whistles are pretty incredible. Keys, locks, combinations to locks, decks of cards, math problems, codes — all are a part of the clues. Everything in the enclosed trailer is there for a purpose, sometimes as a teaser but mostly as a means from moving to point to point.
Participants plot coordinates, move magnetic ships on a map, follow bearings, probe chests and briefcases, even try on the captain’s clothes. They also can hand-crank the old-fashion ship’s throttle.
The business is open to any group looking for some entertainment, and Ray Perkins takes the show to them, hitching up the trailer to a Dodge Ram 2500 for such things as birthday and frat parties, company events and church outings. On the day of the interview, the Perkinses were planning an outing with HSHS Medical Group in O’Fallon.
“We travel anywhere within the St. Louis area and beyond,” Ray said. “But people have called us about post-prom events in Flora, Ill., and just yesterday we got a call from Louisville, Ill. (in Clay County).” 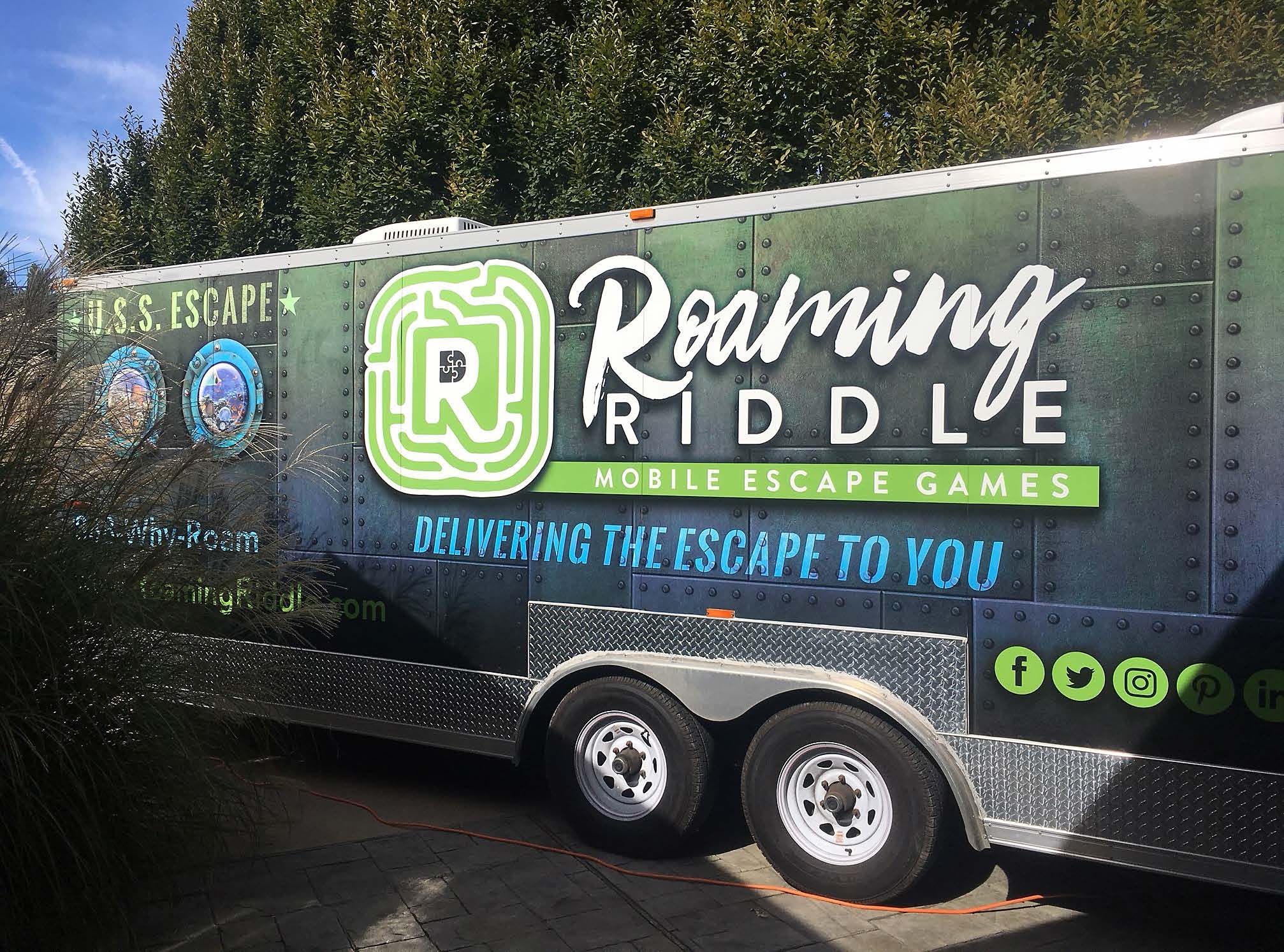 The interior of the trailer is divided between a closed-off control room where Perkins monitors everything and the rest of “the sub” where the game goes down.
Usually, if they are at a festival or event, Cami is outside greeting visitors, explaining what goes on inside.
If it’s a private party or corporate event, both husband and wife can squeeze into the control room.
Video cameras allow the control room to follow participants and provide some helpful clues in case a group is hopelessly stuck. There are several ways to transmit them, from computer messages to sonar screen to alerts.
The layout — LED lighting boards, sound effects and more — hints at complicated, behind-the-wall electronics, and Ray had to learn most of it in about a three-month period.
Families out for an evening of fun are a key customer segment. The Perkinses learned that when their own family was visiting escape rooms, and each member had input on the final product.
“Anyone from any age can play. We’ve had kids as young as 8 years old in here,” Ray said.
The game can be played in options of 60, 40, 30 or 20 minutes. The price is $329 for the first hour and $170 for each additional hour. When they go to festivals, they sometimes charge by the person instead.
Some 75 people went through the trailer during the two-day Oktoberfest in Belleville. Another 100 went through during a single day at the St. Clare Oktoberfest. Games were 20 minutes each with a 10-minute setup in between.
One benefit of having a mobile escape room is not having to pay the costs associated with renting a brick and mortar location.
“Plus, we didn’t want to sit around waiting for people to come to us,” Perkins said.
The couple spent about $50,000 to get the business up and moving, much of that for the custom work done to the trailer, which they initially found on line.
The customizers offered several themes, and the Perkinses took his advice on the submarine look.
“Looking at the ones that we thought would be the most fun for a wide range of people, we thought this would be it,” Cami said.
No matter where they go, people line up to ask questions about the amazing-looking trailer.
“That’s true,” Ray said. “People have heard of escape rooms but many have no idea what they are. And others, say, You’re mobile?’ “And we say, ‘Yes, we come to you’.”
More information about Roaming Riddle can be found on the website or Facebook.