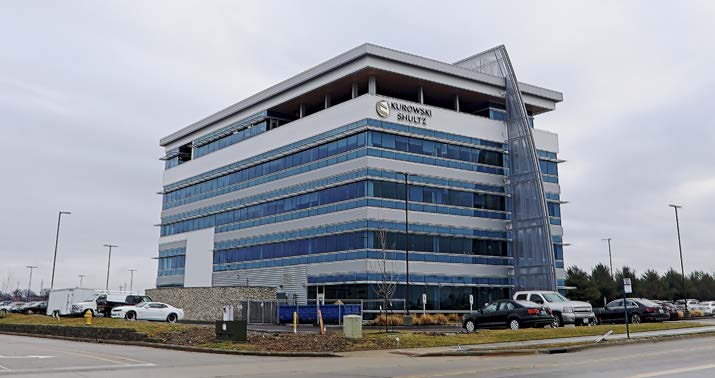 O’FALLON, Ill. — A beautiful, new five-story building at the intersection of Green Mount Road and Pierce Boulevard is an architectural delight, but just as captivating is the engineering work that went into the ground below it.
SCI Engineering Inc., whose Illinois offices are just a short distance away, spent months addressing the terrain prior to the construction of the Green Mount Professional Building by SCI’s client, Plocher Construction Co., of Highland. The 60,000-square-foot building is now completed and much of it leased. Among tenants are 1818 Chop House and Visionary Wealth Advisors.
SCI provided the geotechnical, soil engineering for the project, which included an extensive review of the network of underground coal mines that exist below the site, said Scott Harding, executive vice president of SCI’s operations.
Mines often lead to substantial risk if a project is not properly evaluated and designed. The effort was complex.
“We had to drill boreholes, run cameras into the mine and work with specialized contractors to do the grouting (injected into the mine),” he said. The grout, a lean mixture of cement, sand, fly ash, and water, is pumped into voids, where it hardens, providing mine subsidence risk reduction.
“It’s one of those things where you really need to work with the client. As you uncover significant issues that will dramatically influence the cost of the project it gives them time to evaluate their options and see which is the most cost-effective way to go,” he said.
Among factors that influence construction, especially in Southern Illinois, are the seismic design categories that indicate earthquake potential. Some state maps show some areas as more prone to earthquakes than others, but a good engineer can determine the facts.
“Through additional evaluation we can further identify those risks and perhaps refine the seismic risk, which means the building may not have to be constructed to as expensive a criteria as a generalized map might indicate,” he said. “That was one of the examples where we provided some value engineering and helped our client reduce his cost for construction.”
Several areas north and south of the Interstate 64 corridor are undermined. Harding said some of the dips in the interstate itself are attributable to subsidence.
All of the mines have long been abandoned. Locally, they are referred to as “room and pillar” construction that looks, from above, like a checkerboard, he said.