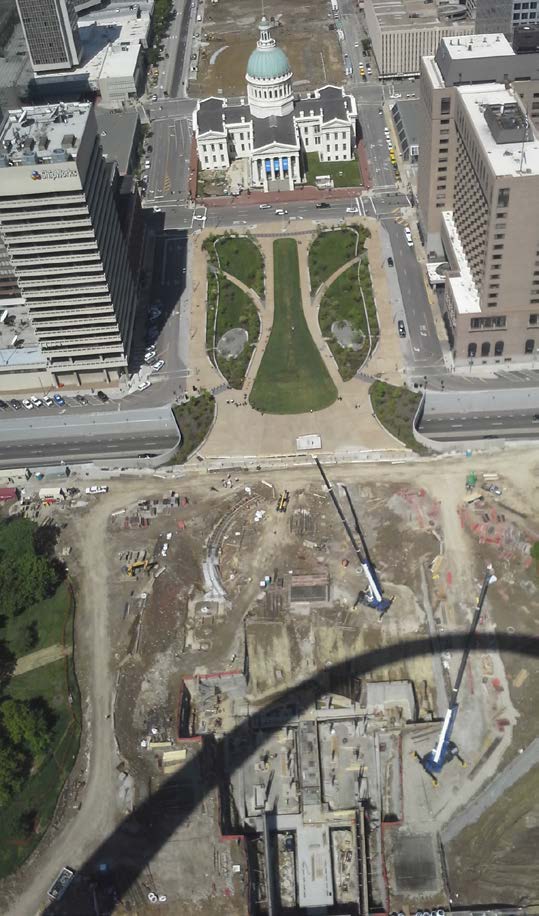 Construction is proceeding on the St Louis Gateway Arch Grounds project. The work is part of a major renovation effort to revitalize the grounds and the surrounding area.
Work commenced in 2013 and is scheduled to be completed this year, at an estimated cost of $400 million. All that remains to be completed is the new museum and visitor center.
In 2011, Geotechnology, Inc. was hired by CityArchRiver to serve as the geotechnical engineer on the project. The initial work involved providing a geotechnical desk study, an archaeological desk study and a Phase 1 environmental site assessment. The purpose of these services was to assess the ground condition and identify potential hazards at an early stage so that risks could be managed during the design and construction processes.
Frank Callanan, vice president of professional services, said a really challenging part of the project has been making sure that the construction work did not damage the historic Eads Bridge. The team performed a comprehensive survey and installed vibration monitors on the bridge and in the tunnels that run underneath the bridge to monitor the work.
The company also provided utility locating services and detailed geotechnical exploration for the new visitor’s center, regraded slopes along the TRRA rail tunnel down to the Leonor K. Sullivan Boulevard and the new Rangers Station.
Michael Van Valkenburgh & Associates out of New York were the lead architects on the project. Also involved were Missouri Department of Transportation, the National Park Service, the city of St. Louis, Metro St. Louis and Great Rivers Greenway.
“This is a landmark project,” said Callanan. “We’re proud to be associated with it.”
Founded in 1984, Geotechnology, Inc., with headquarters in St. Louis, employs approximately 300 employees in 10 offices across Missouri, Kansas, Illinois, Tennessee, Arkansas, Mississippi, Kentucky and Ohio. The professional engineering and environmental services corporation has experience working on a broad range of projects from conceptual design through completion.