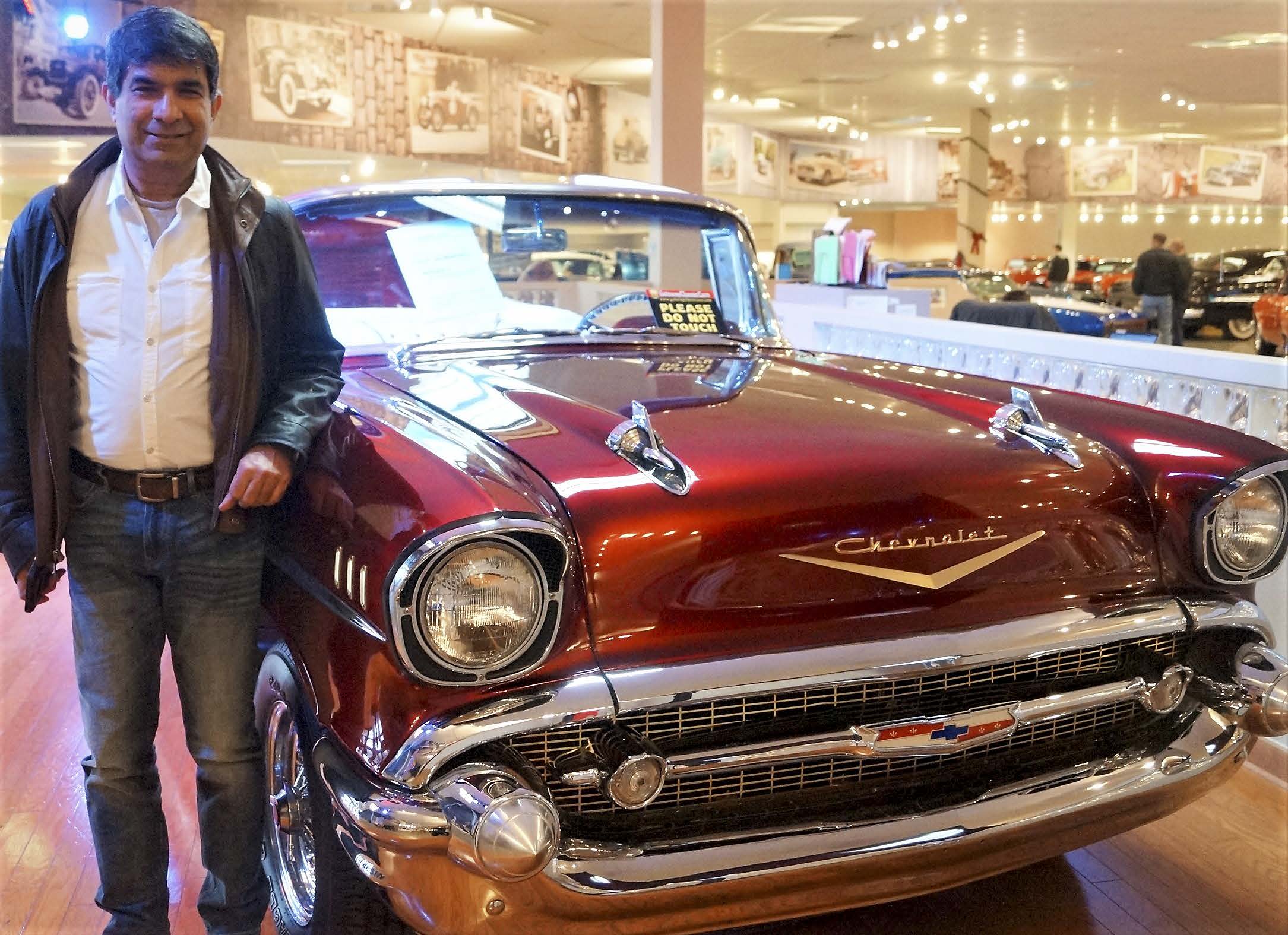 As a teenager, Sal Akbani immigrated to Chicago from Pakistan with his family in the 1970s. He came to the St. Louis area to attend Parks College in Cahokia where he became a licensed airplane mechanic and pilot.
But, in 1998 he was working as an independent business consultant assisting entrepreneurs with their financing needs. One day he received an inquiry from a couple of gentlemen in Alton, who were seeking to finance their fledgling classic car business.
“I looked at their portfolio and business plan and immediately knew it was not a bankable deal,” Akbani said.  “There were no assets because they were simply leasing space and consigning cars.  So, as a business they had no assets; they had no building, no inventory, no accounts payable, etc. Banks won’t finance a business like that.”
Akbani had always been interested in cars. He said he started driving at 12 and owned his first car when he was just 14, and he thought this was the kind of business he would be interested getting into. With the help of family and friends, he was able to raise about $200,000 with the idea that he would simply be an investor and leave the classic car business to his new partners. They opened operations on Feb. 8, 1998, in the former Venture store in Fairmont City but it didn’t take long for him to figure out that his partners were liabilities and had to go.

By the 4th of July, 1999, he’d taken complete control.
Those early days were rough. They were using just 28,000 square feet of the 130,000-square-foot department store building. It was dark and dingy, Akbani said. The roof leaked and it was infested with rodents. But, the business grew so fast that within two years Gateway Classic Cars occupied the entire building.
Akbani said that one of the keys to his success was the Internet. At that time, the classic car business was locally driven with purveyors conducting business over a relatively small geography.
“My competition was late to recognize the importance of the Internet, Akbani said. “By the mid-1990s, I was a firm believer that the future of the business world belonged on the Internet. Today, about 90 percent of my cars are sold sight unseen. Very few cars are sold with the buyers being present.”
Akbani purchased a 140,000-square-foot building on Central Park Drive in O’Fallon, Ill., moved into it in 2014, and left the old Venture store behind. Last year, Gateway Classic Cars generated $50 million in gross revenues from a network of 14 stores scattered from Fort Lauderdale, Fla. to Milwaukee, Wis. He’s projecting between $72 million and $78 million in sales for 2017 and hopes to reach $100 million in 2018 or 2019.
That’s not entirely due to the Internet, says Akbani. It’s also due to developing a sterling reputation in the market. About 40 percent of his business comes from repeat customers or referred customers.
“It’s a treacherous market,” said Akbani. “There is a lot of misrepresentation in the market and we do everything to make sure that the representations are as true as can be found. Confidence is key.”
The need for confidence and reputation is so important because these cars can vary so drastically in value.
“I have a 1965 Mustang that was sent to us from Kansas City,” Akbani said. “We’re asking $590,000 for this car because of its pedigree and history. The auto legend Carroll Shelby built it in his shop and raced it and we have full documentation from the car owner. We have history on the car and all the data that is required on that kind of car. You can buy a car similar to that for about $25,000. You can alter that $25,000 car to make it look like the Shelby car and sell it at a premium to somebody that does not know the difference. If you send that car to us claiming that it’s an original Shelby Mustang, you’re going to have to show documentation to prove that it is what it is.  We scrutinize the seller and the product that they’re selling very closely before we put the car on the market.”
Gateway sells the cars on consignment and doesn’t accept them unless they are in very good condition. But, Akbani says, these cars are restored by men by hand so there’s always the good points and bad points with every car no matter what the price is. He says you earn your reputation in the business through full disclosure, telling the prospective buyer everything you know about the car—both good and bad.
“What that does,” said Akbani, “is it builds a lot of confidence in the buyer to buy from us.”
Gateway charges sellers an upfront fee. They take pictures and videos and advise them on what the product will bring in the market. They negotiate a price with the seller and mark it up 20 percent above that.  Their minimum commission is 12.5 percent or $2,500, but they average about 16 percent to 17 percent.
In addition to the O’Fallon headquarters, Gateway has stores in Chicago, Indianapolis, Orlando, Fort Lauderdale, Dallas, Milwaukee, Louisville, Detroit, Tampa, Houston and Nashville. They’re opening a new store in Philadelphia around March 1 and looking for locations in Denver, Austin, Texas, and Scottsdale, Ariz. Akbani said that he was looking at developing a total of 38 stores in the U.S. plus another eight to 12 in foreign countries.
“We do market studies for at least one full year before we move into a market,” Akbani said. “We watch the market; we watch the trends; we apprise the number of cars that are available from private sellers and, if it is sufficient, then we start looking into real estate to lease there. Then we start setting up offices, hiring and training staff, marketing, bringing cars in and the next thing you know, the sun is shining bright. When the store is established and we know where the perfect location is going to be, we start looking into purchasing our own buildings.”
Gateway Classic Cars currently has more than 200 cars for sale in its O’Fallon store and is open to the public Monday through Saturday from 9 a.m. to 5 p.m.