MARYVILLE — A local homebuilders group and its executive officer are being recognized for a book published to inform members of laws affecting their trade. 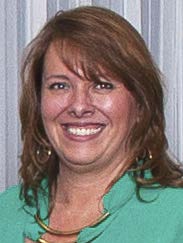 “Building Industry Laws You Should Know” is the product of years of work, said Tracy Butler, of the Home Builders Association of Greater Southwestern Illinois.
“It is a book that I wanted to do for years for our members to be able to know all the different laws that they should know in their industry,” Butler said. “When they have a question, concerns or are just not sure about something, they can refer to this.”
The ready reference will save time when people are preparing or working on projects, she said.
The effort has roots in articles that Home Builders of Illinois Association lobbyist Bill Ward produced and shared with members, going back a few years.
“I held on to all of them,” Butler said. “I got some funding put in (the budget) last year and produced it.”
The publication is structured in booklet form, allowing it to be updated periodically.
“It will be like the membership directory we give the members each year, the same kind of format,” she said.
The book deals only with state laws but on topics as diverse as: fire sprinkler mandates, the building code freeze law, implied warranties, consumer protections, the Residential Code Act, storm-chaser regulations, the Illinois Energy Conservation Code, public Construction Bonds (also called “Cash Bond Cows”), farmland preservation, tax policy laws, application of sales taxes and many others.
Butler broke down topics into five categories.
The first is builder and remodeling laws, which includes contractor licensure; the Employee Classification Act; fire sprinkler mandates; The Model Home Act; and the Model Home Deadline.
The remaining four are: consumer protection laws; The Illinois Energy Conservation Code; land development laws; and tax policy laws.
“Behind that I put a nice recap of all the General Assembly people from our local area. Who your senator is, who are the reps who go with them,” she said. Copies of the booklet have been made available to those state officials.
Asked which law poses the most concern, Butler paused a moment.
“Employee classification is a big one,” she said. “Implied warranty was really a hot one this past year, also. In fact, there was a seminar at the International Builders Show on that. “
The Illinois Energy Conservation Code gets considerable attention, too, because it is a state law. A builder needs to comply with it regardless of whether a municipality is enforcing it. It deals with standards of energy efficiency, she said. Failure to do so can result in a civil action against a builder by the home owner resulting in fines and payment to upgrade to the standards set forth at the time of construction. Standards touch on such variables as air leakage, ventilation and HERS (Home Energy Rating System) ratings.
“They compile all the data to make sure your ACH (air change) rate is 5 or under. It’s a very detailed, scientific process,” she said.
Many builders are somewhat knowledgeable about general building requirements, but there are many laws.
“I would say, for sure, that most members of our organization are (knowledgeable). We’ve had many seminars, published this (material) and give them all the information they need,” Butler said. “If they go and search for it and know where to look for it, they can find it. I would say if you’re not involved with an organization that shares this information with you, you’re not going to know about it.”
Among recent areas of concern are laws dealing with vacant lots and farmland.
The Vacant Lot Act, which prevents assessors from increasing the valuation of a lot during its development and sale, was up for sunsetting last year but the homebuilders industry managed to get it renewed.
Law has also been clarified regarding development of farmland.
“This had no limitation of what could be paid for regarding development rights. Now, if local government wants to save property for home ownership they cannot merely pursue the development rights. The property must be purchased in whole, which greatly deters county boards from practicing the ‘art of socialism’ on this issue,” she said.
Such “victories” for her industry are reflected throughout this booklet, she said.
The coming year is unlikely to bring much in the way of new, substantive homebuilder issues because of the ongoing budget battles occupying the legislature, she said.
The state’s situation, she said, definitely affects her members.
“They have businesses, and a lot of people are looking to move out of state. They are doing that because Illinois is not a very business friendly state. It’s hard to continue to deal with it because there are many places (states) that don’t have as many regulations,” she said.
Locally, the biggest challenge remains municipalities updating their codes.
Butler said: “A municipality will stay with its code for many years until they feel it’s time to update because of new things that come in. Unfortunately, a lot of stuff going into these codes isn’t always consumer friendly or builder friendly or economically friendly. We do our best to let municipalities know that we are here to work with them.” The local association has a committee appointed to address that concern, she said.
Home Builders Association of Greater Southwestern Illinois has a 16-county territory that goes to the southern tip of the state and as far north as Calhoun County.
The organization has more than 250 members. There are two associate members for every builder/remodeler member. Associates include suppliers, subcontractors, lawyers, accountants, financiers, specialty services, Realtors and others with an interest in the industry.
Butler received an award from the state HBA during the recent annual banquet, for producing the book.
“I am so proud of this,” she said. She made additional copies that are available for purchase from the Illinois Home Builders Association.
There are around 15 subunits of HBA throughout the state.