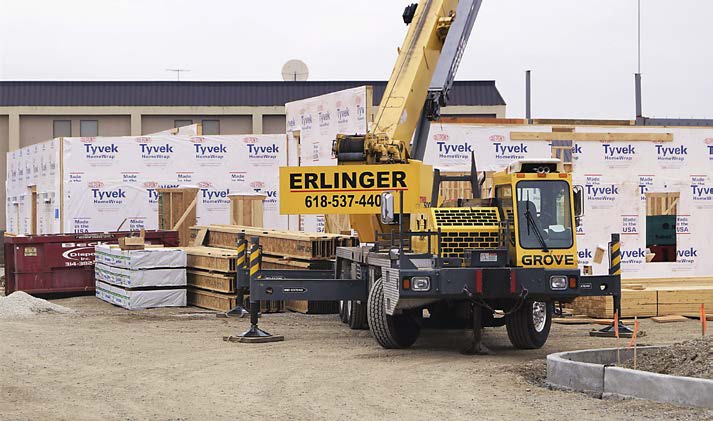 2016 was a busy year for development in Collinsville with new projects springing up and plans for more on the way.
A Colton’s Steak House & Grill is under construction on the site of the former Ponderosa Steakhouse in Eastport Plaza. Headquartered in Arkansas, the company currently has 30 locations in six states (Arkansas, Missouri, Mississippi, Tennessee, Kansas and Kentucky. The Collinsville restaurant will be its first foray into Illinois.
A MedExpress Urgent Care Center also broke ground and opened in 2016 on the site of the former UMB Bank on Beltline Road in front of the Schnuck’s Supermarket. MedExpress, founded in 2001 in West Virginia, is an Optum company.
Cedarhurst is expanding its facilities on Vandalia Street. A new, 12,000-square-foot office building is under construction that will house dental offices and IT services.
And work was just beginning in December on a new Walmart Neighborhood Market on the site of the former Kmart on Beltline Road. Unlike Walmart Supercenter stores, which are typically 180,000 square feet, its Neighborhood Markets are in the 40,000-square-foot range and offer different products and services like a make-your-own pizza and flatbread station and a specialty pastry case where treats can be purchased by the slice or as a whole cake. The Markets are positioned as a compliment to the mega retailer’s supercenters and often carry local products.
Downtown, or, as they refer to it in Collinsville, Uptown, the city completed the Collins Park project and restoration of the historic Collins house. Built by D.D. Collins around 1845, the home is being converted into a museum complete with furnishings from the 1840s.
In a move that is expected to pay dividends in the future, the Collinsville City Council passed legislation to create both a Tax Increment Finance district and a Business District for the 850-acre Southwest Corridors Redevelopment Area. The TIF and business district will include portions of St. Louis and Collinsville roads, from Fairmount Park Racetrack on the west to Jefferson Avenue on the east and along Bluff Road north to Interstate 55/70.
The area, which is currently anchored by a Rural King store and a Shop N Save supermarket, is plagued by inadequate and deteriorated infrastructure, frequent flooding and excessive vacancies. The redevelopment plan is focused primarily on remedying the infrastructure problems and making streetscape improvements to beautify an important entrance to the Collinsville community, secure its anchors and attract new investment. Work is expected to get underway on these improvements in 2017.