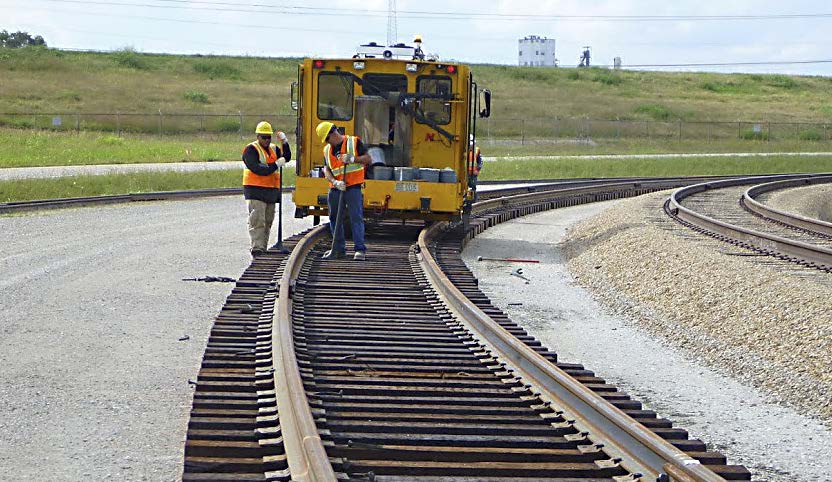 By ROBERTA CODEMO
America’s Central Port, located in Granite City and Madison, completed two major rail projects in 2016, increasing rail capacity by 30 percent.
“We laid 4.25 miles of new track,” said Bill Stahlman, director of engineering and construction for America’s Central Port. “That’s a lot of track to put in.”
The port recently constructed 8,000 feet of track into a new 60-acre industrial site, providing direct access to a new 126,000-square-foot advanced chemical processing building, with a spur for future development on the site. The $2.5 million project included rehabilitating an existing rail line that serves warehouses at the port, and was funded with an Economic Development Administration Grant and a loan from Madison County Community Development.
It also completed construction of the South Rail Loop. The initial single rail track that was constructed in 2009 will now have two additional adjacent tracks to meet increased train capacity at the harbor. More than 15,000 feet of track was constructed, and the Port paid for the $2.5 million project through loan funds.
Looking ahead, the port wants to build a new warehouse every year for the next 10 years on its new industrial site.
“Every year we redo our five-year Capital Improvement Plan and look at projects to focus on,” he said, adding ideas to expand rail yards and spurs are under discussion along with roadway upgrades.
Plans are already in the works to construct a multi-tenant, 160,000-square-foot warehouse with “niche style” construction that will incorporate new heating and cooling requirements, among other features. Estimated project costs are $10 million to $12 million. Roadway improvements will add another $700,000 or so to the cost, and will be self-funded through its capital improvement program.
It is also shifting its focus from beyond its 1,200-acre facility where it has focused its attention for the past decade to areas north toward Grafton and into the St. Louis and Metro East area.
“The opportunities for growth are endless,” he said. “We want to see the region be successful.”
The port has seen an increase in rail traffic, which he partly attributes to American’s love for consumer goods. “Rail is a good means to transport bulk commodities,” he said. “Demand is on the rise to invest in infrastructure to handle increased rail traffic.”
As times passes, tracks age. It’s important to stay ahead of the curve.
“We have an extraordinary commitment to infrastructure,” he said, adding that’s what businesses look for.
“We want to be ready for any opportunity that comes knocking at our door,” he said.