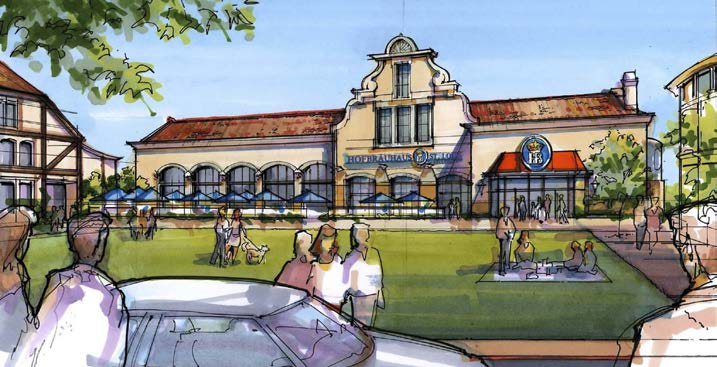 The city of Belleville marked a strong year in 2016 with development occurring throughout the town, according to Mayor Mark Eckert.
The city completed construction of a new police station on 720 W. Main St. in the Downtown area and officially opened it this past November. Just before the end of the year, the long-awaited redevelopment of the former Meredith Home/Belleville Hotel on the town square came another step closer to fruition when the city inked a redevelopment agreement with developers Bywater Development Group and the Southwestern Illinois Development Authority in December. Some $12 million will be spent to convert the historic, vacant building into commercial space and senior apartments. Construction should begin in 2017.
Two shopping centers underwent renovation and transition in West Belleville. The Market Place Shopping Center on 6401 W. Main St. is being renovated, and the 4204 Main Street Brewing Co. is expanding its brewing operation there. And, in December the City Council approved a redevelopment agreement for the Shopland Plaza Shopping Center on West Main Street.
Development is occurring from one end of the Route 15 corridor to the other. Construction of the Hofbrauhaus is continuing across from Our Lady of the Snows Shrine. Completion is expected in May. And a new Hyatt Hotel and convention center and Jack Flash Convenience Store have been announced for the 177-acre site with construction to begin in 2017. A soccer park is also part of the master-planned development.
Further east in the corridor, Belleville Crossing Shopping Center near Frank Scott Parkway is taking on new tenants, including St. Louis Bread Co and Burger King.  Yet further east in the corridor, the EDGE, which features the world’s largest laser tag arena, two arcades, five movie theatres and a family friendly sports pub with 45 flat screen TVs, was renovated in 2016 and is planning an expansion in 2017.
On the far-eastern end of the corridor, Adams Auction’s is building a large facility for banquets, auctions and events. Called the St. Clair County Event Center, it’s going up near the intersection of Illinois Route 15/13 and Green Mount Road.
But, it’s the intangible things that may be most important, according to Eckert.
“The volunteer spirit and all the festivals that we do from the Christkindlmarkt to the No. 1 one art show in the nation, Art on the Square: All those things add to the community as much as the brick and mortar projects,” Eckert said. “A lot of people have stepped forward and said, ‘I want to be a part of this,’ so it’s an exciting time in Belleville.”