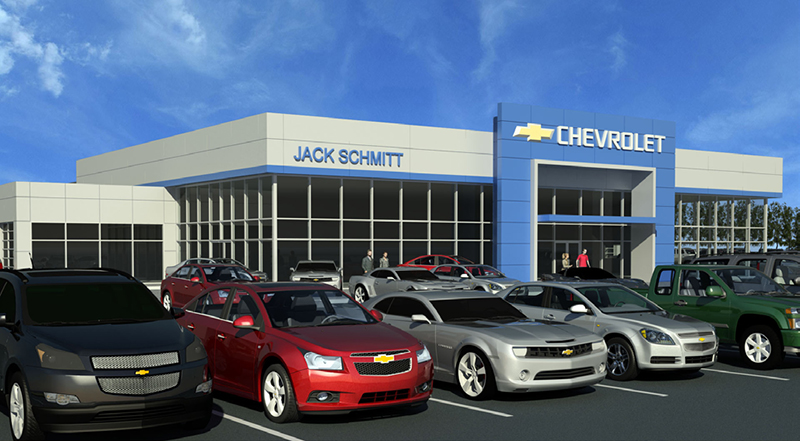 By ALAN J. ORTBALS
Impact Strategies just completed the new $5.2 million Jack Schmidt Chevrolet on Illinois Route 143 in Wood River. The 11-acre site sits right across the street from the Federico Chrysler Dodge Jeep Ram and the Auto Centers Nissan dealerships, both of which were also built by Impact.
Scott Manning, an SIUE graduate with a degree in construction management, was Impact’s project manager on the job. While he’s been working in the construction field for five years, Manning said that this was his first “ground up” car dealership project.
Ground was broken on the project in December 2013 and it took 10 months to build.
The new Jack Schmidt dealership is replacing an existing facility on Illinois Route 111. The new facility consists of a 32,000-square-foot main building that will house the showroom, offices and service center. Another 7,500-square-foot building contains a car wash and detailing bays. There are 9 acres to display and stock new and used vehicles which, according to Tom Gerke, general manager of Jack Schmidt Chevrolet, provides the largest selection of vehicles in the area.
It also offers three electric vehicle chargers on the outside of the building for customers with electric cars to use.
The main building is a pre-engineered metal building and sports Chevy’s signature blue arch façade.
Impact Strategies has built a strong core of business in the automotive field. Besides the Wood River dealerships, the firm has also remodeled Jack Schmidt’s O’Fallon, Ill., dealership, performed work for the Auffenberg Dealer Group in O’Fallon, Ill., built the new Oliver C. Joseph Buick GMC dealership in Belleville and a new Mini Cooper dealership in St. Louis.
With the Jack Schmidt Chevrolet project behind him, Manning has moved on to manage the construction of the Cottages at Cathedral Square, a 32,000-square-foot senior housing development in downtown Belleville.