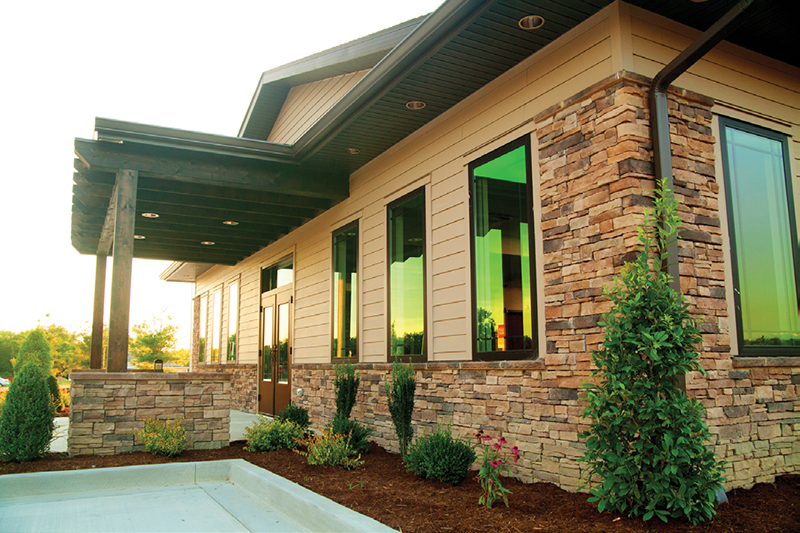 By ALAN J. ORTBALS
As of July 1, Southern Illinois Healthcare Medical Group had a new Plastic and Reconstructive Surgery Center in Carbondale. The Korte Company designed and built it in just eight months.
Korte and SIH Medical Group representatives had had some casual conversation in the fall of 2013 regarding the need for such a center, said Anthony Walker, Korte’s Healthcare Initiatives director, but, until the staff was in place, it made no sense to start the project. Serendipitously, later that fall, SIH Medical Group found the staff and needed to occupy the building by July 1, 2014.
After interviewing, Korte was awarded the project in November 2013, designed it, built it and turned it over June 30, 2014.
“The only way we could meet that deadline was to use our Integrated Design-Build project approach,” said Walker.
The design was fast tracked and, realizing that footing and foundation work would need to be done in January, builders blanketed the ground to keep it from freezing. The base and slab went down despite the fact that January was one of the coldest months on record in this area.
“Our team was still working on overall building design with the client when we started moving dirt,” Walker said.
The 5,528-square-foot facility provides patients of all ages access to a multitude of services, including reconstructive procedures and comprehensive line of non-surgical treatment options including laser treatments, chemical peels and Botox injections.
The facility also offers a number of surgical procedures, including reconstructive hand surgery, and specializes in burns, microsurgery, pediatrics, trauma, cosmetics, breast augmentation, wounds and weight loss. The center includes three exam rooms, a procedure room, a treatment room, a waiting room with retail space, and a private discharge waiting area.
“It couldn’t have happened without a lot of commitment, coordination and participation from the SIH Medical Group,” Walker said. “We set an aggressive schedule in order to make the June 30 date and SIH Medical Group was right there with us the entire time. As a team, we didn’t spend any time backing up or second guessing. It was a true partnership through the entire design and building process.”