Governor was sworn in to second term at Springfield convention center 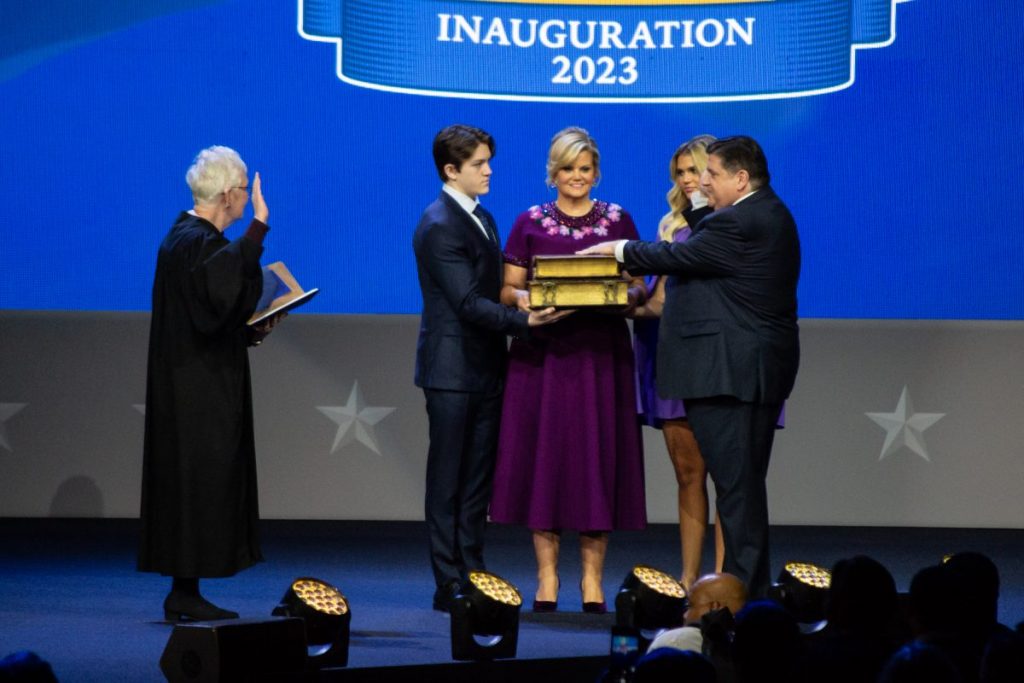 Gov JB Pritzker was sworn in to a second term Monday in a ceremony at the Bank of Springfield convention center blocks from the Illinois State Capitol. Appearing with his family, Pritzker took the oath on a pair of Bibles held by his wife, MK. One belonged to Henry Horner, Illinois’ 28th governor who held the office from 1933 until 1940. The other belonged to Abraham Lincoln, 16th president of the United States whose image is ubiquitous in the capital city, which is home to his presidential library. Pritzker was sworn in by Illinois Supreme Court Chief Justice Mary Jane Theis. He was also accompanied by his daughter Teddi and son Don. He struck an optimistic tone while laying out policy goals for the next four years, including expanding access to child care and preschool and making in-state college free for middle class families. Illinois’ other constitutional officers were all also sworn in to new terms Monday, including incumbents Attorney General Kwame Raoul, Comptroller Susana Mendoza, Treasurer Michael Frerichs and newly-seated Secretary of State Alexi Giannoulias. (Capitol News Illinois photos by Jerry Nowicki)

Gov. JB Pritzker was sworn in to his second term Monday [Jan. 9, 2023] with the state’s other constitutional officers, promising a bold and ambitious agenda for the next four years.

The ceremony was held at the Bank of Springfield Center, the same venue that for several months served as a makeshift House floor during the height of the COVID-19 pandemic to allow for social distancing. Pritzker recalled that time while reflecting on his first term in his inaugural address.

“The hope we share, the hope I expressed at my first inauguration, was born of a truth lodged firmly in my heart – that Illinois has always stood at the intersection of American ambition and human resilience. And that combination is what has made this the greatest state in the union,” Pritzker said.

A friendly crowd of supporters and fellow dignitaries was enthusiastic about the governor’s proposals, applauding and cheering at the mention of banning assault weapons, bringing down the cost of higher education and ensuring reproductive rights in the state.

Pritzker said education will be a main priority in his second term, and he emphasized the importance of making preschool more readily available and college tuition free for every family with median-income or below.

“I propose we go all in for our children and make preschool available to every family throughout the state,” he said, eliciting an eruption from the crowd. “And let’s not stop there. Let’s provide more economic security for families by eliminating child care deserts and expanding childcare options.”

With time running out to pass a ban on the sale of assault weapons in Illinois before the new General Assembly takes office Wednesday, Pritzker used the opportunity to advocate for the version of a bill passed by Democrats in the state House last week.

“When I campaigned for reelection and promised to pass an assault weapons ban, eight states already had one. Very soon, Illinois must be the ninth. And we ought to have a real accounting of the assault weapons currently in circulation,” Pritzker said. “Let’s get it done, and then the federal government should follow our lead.”

As he emphasized the importance of protecting reproductive rights, the crowd responded with enthusiastic applause and even shouts.

“The extremists still want to take away a woman’s right to choose, and I don’t intend to let them,” Pritzker said. “That’s why yet again, on women’s rights, Illinois will lead.”

“I was so pleased to drive into the state of Missouri to the temporary graduation last year, but not nearly as happy as I was to drive out of Missouri – out of a state that does not reflect a woman’s right to make decisions about her body,” Raoul said.

Pritzker was sworn in by Chief Justice Mary Jane Theis, accompanied by First Lady MK Pritzker and their daughter Teddi and son Don. He took his oath on two Bibles. One belonged to Henry Horner, Illinois’ 28th governor who held the office from 1933 until 1940. The other belonged to Abraham Lincoln, the 16th president of the United States whose image is ubiquitous in the capital city, which is home to his presidential library.

The ceremony followed an interfaith service held at First Presbyterian Church earlier this morning. In addition to Pritzker and Lt. Gov. Juliana Stratton being sworn in for their second terms, Secretary of State Alexi Giannoulias was sworn in to his first, replacing Jesse White who is retiring after 24 years.

Raoul was sworn in for his second term, and Comptroller Susana Mendoza and Treasurer Michael Frerichs each took their third oaths of office.

After Pritzker was sworn in, Senate President Don Harmon issued a statement congratulating the governor.

“He showed the country that Illinois stands for progress, overseeing the passage of landmark legislation protecting reproductive rights, reforming our criminal justice system and moving us toward cleaner energy. And he led us through a once-in-a-century pandemic, maintaining constant, steady presence while making difficult decisions,” Harmon said in the statement.

Giannoulias took a moment to thank White, who has spent a historic 24 years as Illinois’ secretary of state: “the legend, who passed me the baton.”

Giannoulias previously served as treasurer from 2007 to 2011, and he expressed excitement for serving in office again, but nodded to the historical baggage attached to the secretary of state’s office, and Illinois government in general.

“Today, as soon as I leave here, I will sign new executive orders ensuring ethics and integrity in the Secretary of State’s office,” Giannoulias said.

He said transparency, good governance and technology innovation can help “eliminate the time tax too many of you are paying everyday just to access simple government services.”

“The secretary of state’s office can make your lives better and we will be relentless in making sure it does,” he said.

The celebration was scheduled to continue Monday night with an inauguration party at the Illinois State Fairgrounds.