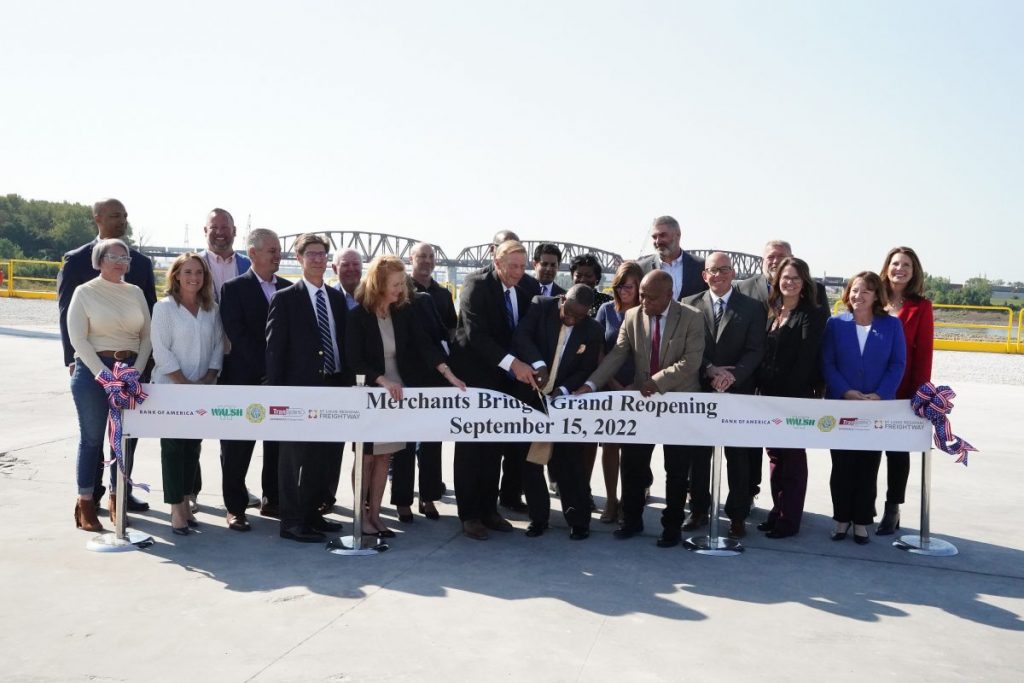 Terminal Railroad Association (TRRA) President Brent Wood (left, holding scissors) and Venice, Illinois Mayor Tyrone Echols (right, holding scissors) officially cut the ribbon during the Grand Reopening Celebration for the Merchants Bridge on Sept. 15, 2022, as a freight train crosses the newly reconstructed bridge in the background. They are joined behind the ribbon by other elected officials and transportation leaders from Illinois and Missouri and representatives from the various partnering organizations who helped to deliver the project. (Courtesy of the St. Louis Regional Freightway)

The St. Louis region marked a series of major milestones in 2022 that enhanced the bi-state area’s freight network at a time when supply chain disruptions were the norm and the need for resiliency and redundancy had never been greater. From the lingering effects of COVID-19 to the historic drought that severely impacted barge traffic on the Mississippi River, 2022 underscored the importance of being able to offer shippers options when it comes to moving their goods. It also further reinforced the effectiveness of the nationally recognized approach the St. Louis region is taking to strengthen freight infrastructure.

Topping the list of the region’s accomplishments in 2022 was the completion of the $222 million project to replace the Merchants Bridge over the Mississippi River. With the grand reopening of the new double track bridge in September, the St. Louis Regional Freightway celebrated the delivery of the region’s highest priority infrastructure project. The new structure can accommodate trains traveling in the opposite direction at the same time, doubling the capacity of the bridge, so it can move freight faster, more cost-effectively and reliably. Terminal Railroad Association of St. Louis (TRRA) owns the bridge, which dates to the 1890s and crosses the Mississippi River at St. Louis serving six Class I railroads and Amtrak. TRRA provided 90 percent of the construction costs, making this project a model for public-private partnerships.

Another regional high-priority project also advanced during the past year, with the August announcement by the Illinois Department of Transportation (IDOT) and Missouri Department of Transportation (MoDOT) that they have selected Chicago-based Walsh Construction for the Interstate 270 Mississippi River Bridge Replacement and Riverview Drive Interchange project. Jointly funded by IDOT and MoDOT, this bridge replacement project is the result of a unique collaboration between the two DOTs that resulted in their ability to simultaneously secure hundreds of millions in needed funding to move forward. The multi-year construction project is expected to begin in January 2023. 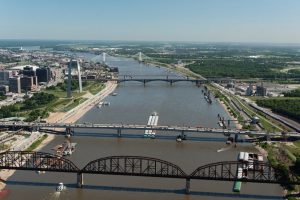 This past year also was a pivotal period for the plans to bring new Container-On-Vessel (COV) service to the Midwest. The Jefferson County Port Authority received a $25 million grant from Missouri officials to support the development of a new container facility at the port in Herculaneum. It will be a key hub on the new all-water, north-south trade lane connecting the St. Louis region to the lower Mississippi River and on to worldwide destinations.

American Patriot Container Transport LLC (APCT) is expected to announce soon the awarding of the contract to build the first four vessels that will be part of the new COV fleet. The U.S. Coast Guard and Seamen’s Church Institute’s Center for Maritime Education Work also began work this past year to prepare for the safe debut of those new vessels.

Other accomplishments in 2022 include funding of corridors of Interstate 70 from Kansas City to St. Louis and improvements to Interstate 55, which further support various port projects in Jefferson County, Missouri. These are just a few of the MoDOT projects on the St. Louis Regional Freightway’s 2023 Priority Projects List, which includes 25 infrastructure projects in Illinois and Missouri totaling more than $3.8 billion. The investments are focused on strengthening critical roads, bridges, rail infrastructure, and port and airport facilities and help to drive the high level of industrial construction occurring on both sides of the Mississippi River in Illinois and Missouri.

“Multimodal transportation is part of an interdependent supply chain, and these are the types of projects that help bridge the gap when there is a weak link in the system,” said Lamie. “We salute the Freight Development Committee, IDOT and MoDOT, East-West Gateway Council of Governments and industry leaders for their leadership with infrastructure investment and their focus on building in redundancy so our region’s freight networks can be part of the solution to the national supply chain disruption.”

The infrastructure investment comes at a critical time as the region continues to see significant new investment in the industrial sector. Modern bulk distribution buildings under construction in the two-state area hit a historic high in early 2022, approaching 8 million square feet (MSF). The record level of construction illustrates the industrial real estate market in the southwestern Illinois and eastern Missouri region continues to expand to meet ever-increasing demand as world and domestic markets strive to move beyond the disruption that defined the prior two years. In mid-2022, nearly 7.4 MSF remained under construction in the St. Louis region, a level of construction 78 percent higher than 2021 and 47 percent higher than the most recent five-year average. One hundred percent of the modern bulk construction projects underway are speculative, a level of speculative activity that is higher than in 2019, 2020, and 2021 combined, and a clear indication that developers believe the St. Louis market is a solid place for investment.

Further evidence can be seen in more recent announcements, a few of which include plans for a $129 million St. Charles County industrial park in Missouri that is expected to create more than 950 jobs; a new $188 million industrial park to be developed by NorthPoint Development in Maryland Heights, Missouri; and electric car manufacturer Tesla’s plans to open a massive warehouse south of Interstate 270 in Illinois.

The Tesla development would take shape in a noteworthy industrial corridor in Illinois — a 60-mile stretch of Route 3 near St. Louis. Spanning from north of Alton in Madison County to south of Waterloo in Monroe County and bordered by the Mississippi River and Interstate 255, this nationally significant heavy industrial corridor is already a thriving hub for manufacturing and logistics operations that generate more than $16 billion in annual business revenue and support 221,881 direct and indirect jobs. The Illinois Route 3 corridor has distinct advantages over other areas around the country, such as the percentage of direct jobs in manufacturing, transportation and warehousing that greatly eclipse the regional and national averages. More than 20 types of manufacturing operations are present in the corridor, delivering a location quotient of 1.26 or more and indicating a noteworthy regional concentration.

“These concentrations and logistical connections make it a unique asset in the Midwest from a site selection point of view,” said Doug Rasmussen, CEO and Managing Principal of Steadfast City Economic & Community Partners, the author of a recently completed economic impact study on the Illinois Route 3 corridor.

The region’s robust aviation sector also made headlines in 2022 as the directors of five of the busiest airports in the bi-state area gathered for a forum that spotlighted not only the unique collaboration that exists between them but also their collective impact on the St. Louis region’s economy. The event revealed that St. Louis Lambert International Airport and Spirit of St. Louis Airport in eastern Missouri and MidAmerica St. Louis Airport, St. Louis Downtown Airport and St. Louis Regional Airport in southwestern Illinois have a combined annual economic impact that exceeds $10 million. Between all five airports and their tenants, they employ 36,500 individuals, a number that is set to grow in the coming year as major tenants such as Gulfstream and West Star Aviation expand their operations in the region. In other aviation-related news, Lufthansa Airlines launched direct flights from St. Louis Lambert International Airport to Frankfurt Germany in June, marking the return of direct service to Europe for the first time in 20 years.

In May 2022, the St. Louis Regional Freightway hosted the 5th annual FreightWeekSTL, which delivered a wealth of great content spotlighting a series of innovations, investments and partnerships that will make national and global freight movements more efficient. The week-long conference highlighted the St. Louis region’s role in those initiatives and reinforced that one location with global access makes this region a logistics and manufacturing hub primed for continued growth. Highlights can be found at www.TheFreightway.com, where plans for FreightWeekSTL 2023 will also be shared in the coming weeks.