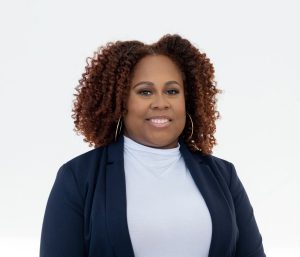 The University of Missouri–St. Louis honored the contributions of six outstanding alumni in the fields of business, education, geoscience and nonprofit leadership on Oct. 13, 2022, during its 31st annual Founders Celebration at the Blanche M. Touhill Performing Arts Center.

Among the honorees was Candace Hall, an assistant professor and graduate program director in the Department of Educational Leadership at Southern Illinois University Edwardsville, who received the Outstanding Young Alumni Award.

UMSL shared the following notes: “Candace Hall, BA 2010, is a rising star in academia. She’s already proven herself as a leader as assistant professor and graduate program director at Southern Illinois University Edwardsville, where she revamped the College Student Personnel Administration Program. During her time at UMSL, Hall was an active student employee and leader, giving campus tours, mentoring students and helping lead organizations including the Student Government Association, the Associated Black Collegians and The Current Newspaper. After her master’s work, she returned to UMSL and worked in the Welcome Center as an administrator, mentoring UMSL students and serving on the Student Affairs Professional Development Committee and Leadership Summit Committee. She continues to be an advocate and support for her students both past and present.”

UMSL has presented the Distinguished Alumni Awards annually since 1987 to honor esteemed alumni for their professional accomplishments, community service or both while also representing the highest standards of integrity and character. Their work transforms lives locally in St. Louis, nationally and globally as they drive for change to improve the world around them.

Read more about this year’s other honorees:

Shawntelle Fisher, BS, BES 2016, is an influential leader, speaker and teacher. After going to prison seven times, she was inspired to go back to college and to start SoulFisher Ministries, a nonprofit she now leads under the direction of her board. The organization strives to be a center of hope for women and families impacted by incarceration, providing workforce innovation and GED programs to help those currently and formerly incarcerated make the transition to daily life while reducing recidivism. Fisher also earned her master’s in social work from Washington University in St. Louis and a master’s in divinity from Eden Theological Seminary. She received the Gephardt Institute for Civic and Community Engagement Award and was recognized as one of the Most Influential Business Women by the St. Louis Business Journal in 2020.

Steve Hamilton, BSBA 1977, began his career as an associate with the law firm Susman, Scherer, Rimmel & Parker and a clerk on the Missouri Court of Appeals after earning his JD from Washington University School of Law. In 1983, he joined CSI Leasing, the largest independent nonbank information technology lender in the United States, as corporate attorney, eventually rising to general counsel. Beginning in 1999, he led CSI’s international expansion to Europe, Latin America and Asia until becoming president and COO in 2008. Eight years later, he was named vice chairman and CEO, and then chairman in 2018. Throughout his career, Hamilton has hired and mentored UMSL graduates and served on the College of Business Administration Leadership Council for more than 10 years.

Dick Jung, BA 1971, is a distinguished educator and reformer in both the public and private sectors locally and nationally. After graduating from UMSL in 1971, Jung began his career as a teacher at University City High School and eventually went on to earn master’s and doctoral degrees from Stanford University. He returned to the St. Louis area as the principal at John Burroughs School. Known as a pioneer in the work of charter schools and school reform, Jung created a school search and leadership development firm and became the executive director of a consortium of independent schools in the Washington, D.C. area. A published author, his latest book, “Mike Kirst, An Uncommon Academic,” is now available on Amazon.

Dawn King, MS 2012, Ph.D. 2015, is currently a geodetic earth scientist at the National Geospatial-Intelligence Agency in St. Louis. A proud UMSL physics alumnae, King was crucial to the development and signing of the Educational Partnership Agreement between the NGA and UMSL, which will help develop a variety of academic courses to provide students with the skills necessary for careers in geodesy, geophysics and geospatial intelligence. She has made significant scientific contributions to the understanding of phase transitions in evolutionary systems and to the use of artificial intelligence for modeling the Earth’s gravitational field.

Marcela Manjarrez, BS 1998, has more than 20 years of experience in economic research, analysis and strategic communications. For seven years, she worked as chief communications officer for Centene Corporation and prior to that served as vice president of public affairs for the Federal Reserve Bank of St. Louis. She has led M&A strategic communications and corresponding integrations for numerous corporate acquisitions in the billions of dollars. Manjarrez has been recognized as one of the Top Latinos in Corporate America for the past four years and was honored by the St. Louis Business Journal for the Diverse Business Leaders Awards in 2017 and Most Influential Business Women list in 2019.