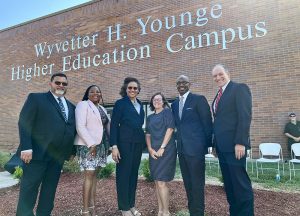 The ESLHEC first opened in January 1999, on the former campus of Metropolitan Community College. The campus is owned by the Illinois Community College Board (ICCB) and co-managed by ICCB and Southern Illinois University Edwardsville (SIUE).

“I filed HR 50 to honor and recognize the Honorable Wyvetter Younge and the impact that she made on the community of East St. Louis,” said State Rep. LaToya Greenwood (D-East St. Louis). “It was because of her advocacy that we have the Higher Education Campus in East St. Louis and I felt it was overdue that the campus be named in her honor.”

“I had the privilege of working with Wyvetter for a number of years, and I have met few people who cared so deeply for the residents they served,” State Rep. Jay Hoffman (D-Swansea) said. “Her passion and dedication to the people she represented was unmatched, and I think it’s wonderful that this campus is being renamed in honor of her. Connecting her name with an institution that creates opportunity for people in her community is a perfect way to remember her.”

“The renaming of the East St Louis Higher Education Campus to the Wyvetter H. Younge Higher Education Campus, is a befitting way to pay homage and reverence to a woman who gave her all to uplift the citizens and institutions of her beloved city of East St. Louis,” said state Sen. Christopher Belt (D-Swansea).

Younge was one of the longest serving state representatives, first elected in 1975, spending the bulk of her career working on issues for vulnerable populations, including substance abuse prevention, services for the homeless, and economic development in East St. Louis until her death in 2008.

“The East St. Louis Higher Education Campus was important to my mother. She considered it a great asset for the community. Our family is honored to have the campus bear her name,” said Margaret Hewitt, daughter of the late Representative Younge.

Since 1999, through community college partnerships, the ICCB’s East St. Louis Community College Center (ESLCC) has provided East St. Louis area residents with access to college course offerings, workforce training, and adult education. A variety of programs including the Workforce Equity Program, Adult Education Program, Highway Construction Careers and Trades Program, and Welding and HVAC programs are offered at the ESLCC. The ICCB is committed to enhancing the programs offered through ESLCC and has plans to expand course offerings in areas such as Health Care programs, Computer Programming as well as dual credit opportunities. The community college services provided are essential in meeting the needs of the students as well as the local and regional workforce.

“Connecting this campus to Wyvetter Younge’s name and her legacy in the metro-east and East St. Louis makes perfect sense. She spent a lifetime trying to improve people’s lives, which is the mission of this higher education campus—to better people’s lives through education,” said ICCB Executive Director Brian Durham.

“SIUE realizes human potential, amplifies access to education for all individuals with a focus on equity, and makes outsized contributions to not only the region, but also the state and nation,” said SIUE Chancellor James T. Minor, PhD. “The SIUE East St. Louis Center is a critical contributor to that promise and purpose. Our service to the historic and resilient community of East St. Louis and surrounding communities is important. We are honored to provide educational programming at the Wyvetter H. Younge Higher Education Campus. Our East St. Louis Center educational programs and community outreach initiatives align with the late representative’s action-oriented mission to better people’s lives, and we are proud to honor her legacy in this way.”

In the coming months, signs throughout the campus will be formally changed to reflect the new name, and a new digital message board will be added.