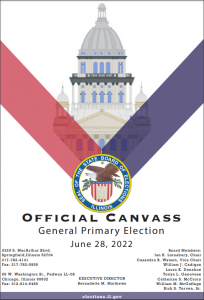 The primary election in Illinois is now certified and voter turnout was the lowest it’s been since 2014.

A 192-page official canvas for the primary available here shows vote totals by county, by party and by candidate in each county.

For statewide races, Kathy Salvi got 30.23 percent of the vote in a seven-way race for the Republican nomination for U.S. Senate. Salvi will face off against Democratic incumbent U.S. Sen. Tammy Duckworth (D-Schaumburg), who ran in the primary unopposed.

Republican attorney general candidate Tom DeVore got 44.21 percent of the vote in a three-way race for the GOP nomination. He’ll face off against incumbent Democratic Attorney General Kwame Raoul, who was unopposed in the primary.

Aug. 10 is the first day to apply for a vote-by-mail ballot. Aug. 26 is when the state elections board will certify the November election ballot to include all independent or new party candidates. Early voting starts Sept. 29. The general election is Tuesday, Nov. 8.

Greg Bishop reports on Illinois government and other issues for The Center Square. Bishop has years of award-winning broadcast experience and hosts the WMAY Morning Newsfeed out of Springfield.