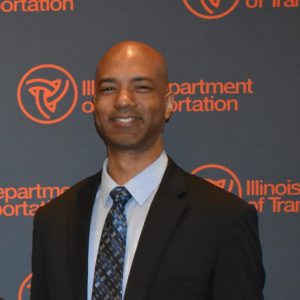 Kirk H. Brown was recently named as the new Region 5 engineer for the Illinois Department of Transportation’s Districts 8 (Collinsville) and 9 (Carbondale).

Brown has been with IDOT for more than 30 years, working out of District 8 headquartered in Collinsville. Throughout his time with the department, Brown has taken on a variety of roles, from construction, resident engineer to project support engineer handling railroad, utility and local agency coordination, to program development engineer for preliminary engineering studies.

In his role as a regional engineer, Brown will serve as IDOT’s point of contact for nearly all transportation network issues for the region. Working with other IDOT staff, Brown will plan and prepare road and bridge improvements as well as maintaining the existing system.

Brown is a graduate of Southern University in Baton Rouge, La., and IDOT’s Professional Advancement of Career Engineers and Executive Leadership Development Series.