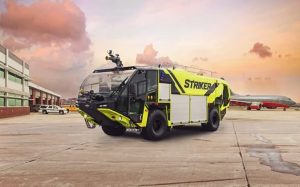 St. Clair County officials this week released a photo of what the new Aircraft Rescue Firefighting truck will look like. The vehicle is to be purchased with a $678,127 grant from the Federal Aviation Administration’s Airport Improvement Program.

The truck that will replace an existing 23-year old vehicle at MidAmerica Airport. U.S. Sens. Tammy Duckworth and Dick Durbin, both Illinois Democrats, announced the grant along with four others going to other Illinois airports on June 8.

“This grant funding is timely as we prepare for an increase in flights and passengers following the opening of our new terminal later this year, and we appreciate the support of our congressional delegation for investments like this that will further enhance safety at the airport as we continue to grow,” said St. Clair County Chairman Mark Kern.

“We thank our congressional delegation for their role in helping to secure this additional funding for MidAmerica Airport through the Federal Aviation Administration’s Airport Improvement Program, and we look forward to investing the dollars in a vehicle featuring the latest technology and accessories that will enhance airport staff’s ability to respond to any incidents that might occur at the airport,” said MidAmerica Airport Director Bryan Johnson.

The grant is one of five recently awarded to airports in Illinois. Totaling $14,912,204, these grants will help improve transit through the airports receiving the funding, continue to keep travelers and employees safe and create jobs in their respective regions.