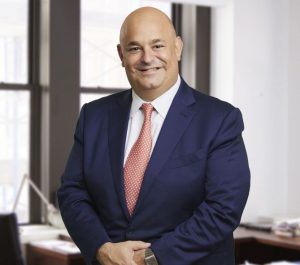 Based in the firm’s New York office, Nassif is a plaintiff’s lawyer who has devoted over two decades to representing clients throughout the country in asbestos and mass torts matters. Since starting at the firm in 2015, his work has contributed to more than $1 billion in settlements and verdicts for the firm’s clients.

“It’s a privilege to be part of a mission-driven firm and work with such talented professionals,” Nassif (shown) said. “Mike Angelides helped transform this firm into a nationwide practice, and John Simmons has truly established a unique, entrepreneurial culture that always puts clients first. I plan to honor that legacy, grow our practices and expand into new areas of litigation.”

“This is an exciting new chapter for our firm,” said Chairman John Simmons. “Larry is a proven, hands-on leader and widely respected by both plaintiff and defense lawyers in asbestos and mass tort litigation.”

The firm has five offices throughout the country with 85 attorneys and 175 legal and support staff. Since 2017, Simmons Hanly Conroy lawyers have won nine asbestos verdicts totaling more than $190 million in California, New York, Ohio and Missouri. In addition, the firm’s complex litigation department, led by Jayne Conroy, has secured more than $28 billion in settlements for its governmental clients to help battle the on-going opioid epidemic in their communities.

“Larry has been an integral part of the team that has advanced our practice,” Angelides said. “He’s been a key player in helping us become one of the only plaintiff firms positioned to go to court anywhere in the country and secure results.”