Nitro Family Foods, known for its homemade Nitro Salsa and pickles, held a grand opening and ribbon-cutting ceremony May 4 to mark the completion of a large conversion project.

The work converted a former, vacant dog grooming facility into a state-of-the-art commercial kitchen with a store front at 231 E. State St. in O’Fallon’s Downtown District.

Owners Nathan and Nicole Parchman started their food business in 2019 using the Illinois cottage food laws that allow people to cook out of a home kitchen.

Because of the traffic from Vine Street Market at O’Fallon Station, the Nitro popularity among local customers expanded faster than anticipated. The Parchmans quickly outgrew their home space and began to utilize the VFW’s commercial kitchen in O’Fallon.

After less than a year the couple decided they needed to have their own commercial kitchen. With a little visioning and the help from a local architect and contractor, the Parchmans turned a run-down location that had been unused for nearly three years into a completely refurbished and thriving location in the heart of O’Fallon. 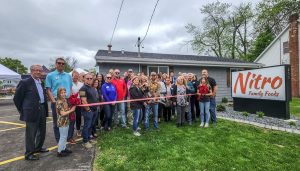 The ribbon cutting was held by the O’Fallon/Shiloh Chamber of Commerce.