An aerial view of the county property, situated on the northwest corner of Plum Street and Governors’ Parkway in Edwardsville.

Madison County has formally closed on the sale of nearly 14 acres targeted for development along Plum Street in Edwardsville.

On Tuesday, Prenzler signed the closing paperwork on the nearly 14 acres at Madison County Title Company. In February, The Staenberg Group, a multi-state development company with offices in St. Louis and Denver – offered $3.86 million for the county-owned property at the intersection of Illinois 159 and Governors’ Parkway.

The Staenberg company is also developing the nearby Orchard Town Center in Glen Carbon, where the Menards chain recently pulled out of a deal to be anchor tenant and where the Meijer supercenter chain is actively being courted.  The Glen Carbon land is catercornered across Plum Street from the county’s site.

Prenzler said the county wanted to sell its own acreage so it did not have to maintain it, and to eliminate the county’s liability. The sale proceeds will go toward county capital improvements and projects.

The Staenberg Group was the sole bidder on the land the county put up for sale in January. The county board approved the sale in March. 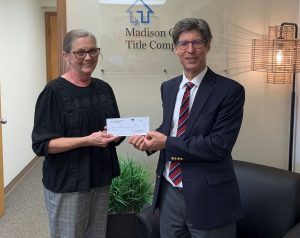