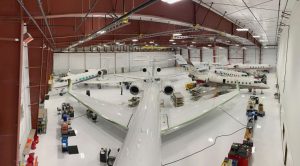 A West Star spokeswoman said there are no planned changes with the new company.

“The West Star name and brand will remain the same, it will be business as usual. They are behind each and every future growth plan we have, starting with our Chattanooga expansion to the Grand Junction, Colo., expansion. We are continuing to look for employees to add to all aspects of the West Star Team,” said Debi Cunningham, the vice president of marketing for West Star.

With the Sterling Group, West Star is well positioned for years of more exciting and rewarding things to come, its top official said.

“Sterling’s employee-focused approach to their business partnerships and their expertise in the general aviation space makes them the perfect fit for West Star,” said Jim Rankin, CEO of West Star Aviation. “As we enter our 75th year, the combined efforts of our experienced employees, our founders and now the Sterling team, will allow West Star to continue to offer the best customer experience in the industry,” Rankin continued.

“We believe that our experience coupled with West Star’s industry-leading customer service capabilities will make us a powerful combination,” said Greg Elliott, partner at The Sterling Group. “Jim Rankin has built a stellar leadership team, and we are eager to help accelerate their growth plans,” Elliott said.

“It has been very rewarding to work with Jim, the previous founders, and the entire management team. They’ve built a great culture, and the team knows how to work together to execute on growth initiatives,” said Todd Solow, NEP partner. “The entire NEP team wishes West Star well, especially as the company celebrates its 75th anniversary and knows the company is in great hands for future success with Sterling.”

Sterling has deep experience in the business aviation industry, having previously partnered with entrepreneur owners to build Lynx, an FBO Network. Greg Elliott, a partner at The Sterling Group, has been involved in building several business aviation platforms in the past 20 years, as either chairman or board member of Lynx, Encore, Trajen, and Landmark Aviation.

West Star has been voted the No. 1 Preferred MRO for eight consecutive years from 2014-2021 in Professional Pilot Magazine’s annual PRASE Survey. The survey first included the ‘Most Preferred MRO’ category in 2014 and West Star has won the No. 11 slot each year since its inception.