EDWARDSVILLE —Seventeen-year-old Aria Burnside is able to able to list “small business owner” and “entrepreneur” on her resume and, as of last month, she can call herself “Madison County Made.”

When the Edwardsville teen started baking two years ago, the furthest thing from her mind was opening a bakery. At the time, Burnside was struggling in high school, which led her mother, Charmian Aaron, to enroll her in homeschool classes online.

Not only did Burnside’s grades improve, but she discovered a new talent — baking.

“After I started home-school, I was always at home, so I just started baking,” Burnside said. “When my mom got home from work, I would be like, ‘Here, taste this.’ I started giving it to people at my church, and they encouraged me to start selling it.”

On Jan. 27, during the Great Rivers and Routes annual Tourism Summit held at the Gateway Convention Center in Collinsville, Burnside received recognition for her entrepreneurship as the first Madison County Made honoree.

Great Rivers and Routes President and CEO Cory Jobe, along with Madison County Chairman Kurt Prenzler, presented Burnside with a vase made by Mississippi Mud Pottery in Alton.

The Madison County Made program is similar to the Illinois Department of Commerce’s Office of Tourism’s Illinois Made program, which first launched in 2016.

“Like the state’s program, we have a lot of artisans, products and experiences unique to Madison County,” Jobe said. “There’s no better way for a tourism office to highlight ta small business owners passion.”

Prenzler said it was an honor to present the first award to Burnside.

“It’s good to see someone pursue their dream and become an entrepreneur at such a young age,” Prenzler said.

During the summit, the state’s tourism office named two Madison County businesses that were added to the Illinois Made program — My Just Desserts in Alton and Water Sweets Soap Co. in Edwardsville.

Mississippi Mud Pottery is a 2016 honoree of the Illinois Made program and each year makes the award presented to all Illinois Made honorees. Other Madison County businesses that are Illinois Made include Kruta Bakery in Collinsville and Old Bakery Beer in Alton. Visit enjoyillinois.com to see a list of Illinois Made.

Madison County and Great Rivers and Routes will join together in presenting other makers into its Madison County Made program in the future. 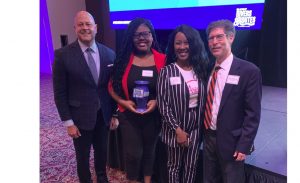