Illinois saw an all-time high for resignations in August, as 201,000 Illinoisans left their jobs. That’s 3.5 percent of the workers in the state quitting or leaving.

What’s causing the spike? Experts at the Illinois Policy Institute point to a larger national trend of workers leaving their jobs – called the “Great Resignation” – contributing to labor shortages across the country. With more job openings than available workers, employers must offer more competitive salaries and benefits in order to attract new employees from a limited pool of workers, often encouraging even those who are gainfully employed to leave their jobs in search of new opportunities. 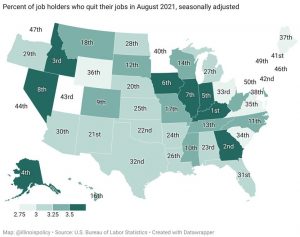 What’s unique about Illinois’ employment struggles? Job opportunities in Illinois are relatively scarce. Illinois is one of only eight states that actually has more unemployed individuals than job openings, an Illinois Policy Institute analysis finds, which means businesses can be less competitive when offering wages or benefits.

The state’s poor economic climate makes things worse for Illinois job seekers than they’d find in other states. Workers quitting their jobs isn’t always leading to them landing new employment. For every Illinoisan hired during the month of August, 1.15 Illinoisans left their jobs – one of the highest rates in the nation.

“Illinois’ increase in the number of individuals quitting their jobs threatens to set back the state’s economic recovery from COVID-19, which was already trailing the nation,” said Bryce Hill, senior research analyst at the nonpartisan Illinois Policy Institute. “Even though Illinois is hiring as much as the rest of the nation, there’s still many unemployed people not finding work. It is unclear whether workers here will find improved job opportunities by leaving their jobs or simply fall even farther behind their peers in other states.”

During that time, the state’s unemployment rate saw a slight improvement, falling from 7 percent to 6.8 percent. However, Illinois still faces the sixth-highest unemployment rate in the nation and the highest in the Midwest. Its economic recovery lags the rest of the country, with the national unemployment rate now a full two percentage points lower than in Illinois.

The job sectors with the largest monthly gains in employment were: leisure and hospitality with 5,500 new jobs; trade, transportation and utilities with 3,700 new jobs; construction adding 2,500 jobs and government with 900 jobs.

The industry sectors that lost the most jobs in September were manufacturing with 2,800 jobs lost and financial activities with 1,100 jobs lost.

To read more about the economic impacts of the COVID-19 pandemic on Illinois jobs, visit: illin.is/covidjobless.