The three tubes cost a total of $15,000 and will be used to help protect against grain entrapments, which accounted for 20 deaths across rural America in 2020.  Each year farmers and commercial grain handlers risk their lives by entering grain bins to remove clumped or rotted grain. 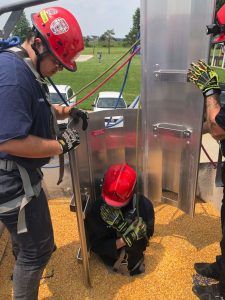 Illinois fire departments in Mendon, Mount Vernon, and Sesser each received a grain rescue tube plus specialized training by the National Education Center for Agricultural Safety, which included simulations of entrapments and rescues using a state-of-the-art grain entrapment simulator.  A total of 48 fire departments received these resources through Nationwide’s 2021 campaign.

Nationwide, one of the country’s top insurers of farms and ranches, created its Grain Bin Safety campaign in 2014 to bring awareness to the hazards of entering grain structures and to equip fire departments with the resources needed to respond quickly.  Since its inception, the campaign has supplied tubes and training to 200 rural fire departments across 30 states.

“To date at least four grain rescue tubes provided through this campaign have been used to save lives of farmers trapped in grain bins,” said VIAA’s President JD Powers.  “We are very honored to join our alliance members and Nationwide in this safety program initiative that enables first responders to protect our rural communities.”

Founded in 2006, VIAA is a group of nearly 150 independent insurance agencies in Missouri and Illinois and is based in St. Louis.