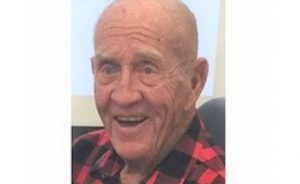 Frank J. Beelman Jr., CEO of Beelman Trucking Co., one of the region’s largest trucking companies, has died. He was 100 years old.

His obituary notice notes that until COVID-19, he went to work every day at the company, which has father had begun in 1906 in St. Louis. Today, the company is based in East St. Louis. The family has built multiple businesses serving thousands of customers in approximately 30 states.

Beelman Jr. was well known in the trucking industry and loved riding Harleys for 86 years. In his earlier years, he loved camping and boating. He was also known as a great storyteller with an amazing memory.

Beelman was an Army veteran of WW II where he fought at Omaha Beach on D-Day and in the Battle of the Bulge. He was one of the last living survivors of two of the bloodiest battles in WW II. He was a 75-year member of the St. Libory American Legion, past commander and he was instrumental in building the St. Libory American Legion Hall. He was a former member of Ainad Temple, East St. Louis and a member of various construction and trucking associations.

The company’s website said Beelman helped his father, Frank Beelman Sr., as soon as he was old enough to wield a shovel and reach the truck pedals. Frank began driving for his father in 1934 at the age of 14. In 1939 Frank Jr. left with four trucks to work at various government projects in Fort Leonard Wood, Mo., Weldon Springs, Mo., and Gary, Ind., until he joined the Army in 1942 with the onset of World War II. Home on a weekend leave, he married his sweetheart, Kathryn Bozsa, in 1943.

Upon Frank’s return to Illinois in 1945 he bought a new truck and began hauling limestone, rock and coal. In 1950 when a new mine in St. Clair County opened Frank purchased 10 tractors and trailers. While starting this fledging business Frank also owned and operated the local school bus route and farmed as well. Kay worked by her husband’s side as the company’s bookkeeper/office manager for the next 50 years.

He is preceded in death by his parents, Frank and Elizabeth, nee Sommer, Beelman, Sr., wife, Kay Beelman, nee Bozsa, whom he married on July 1, 1943, and who died Dec. 4, 2010, a son, Daniel Beelman, two grandchildren, Michael Friederich and Drew Lintker and four sisters, Helen, Veronica, Beatrice and Marcella.