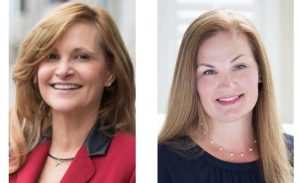 Ann Callis and Rachelle Crowe, both prominent Metro East Democrats, are among those being recommended as United States attorney by the state’s two U.S. senators.

Based on recommendations made by screening committees the Senators established in each district, Durbin and Duckworth have forwarded the names of the following nine individuals to President Biden for consideration:

“We appreciate the opportunity to provide assistance and input in filling these important positions, and we look forward to working with you to ensure a fair and swift confirmation process after you submit nominations to the Senate,” the senators wrote in a letter to President Biden.

The committees have carefully evaluated candidates by reviewing their professional records and application questionnaires, contacting references, and conducting interviews, and have submitted their findings and recommendations to the Senators.  Durbin and Duckworth have interviewed the finalists, reviewed their records, and consulted with each other regarding their qualifications.

Biographical descriptions of those recommended by Durbin and Duckworth:

Rachelle Crowe: Crowe has served since 2019 as the senator for Illinois 56th Senate District, representing much of Madison County and part of St. Clair and Jersey Counties. She is the chairwoman of the Illinois Senate Judiciary Committee, and she has also chaired the Illinois Elder Abuse Task Force and he special committee on Opioid Crisis Abatement.  From 2006-18, she worked in the Madison County State’s Attorney’s Office as an assistant state’s attorney in the Violent Crime, General Felony Crimes, and Juvenile Abuse Sections.  She also practiced at the law firms Carmody MacDonald (2004-2006); Riezman Berger (2002-2004); and Hoagland, Fitzgerald, Smith & Praintis (2000-2002).

Brandon Zanotti: Zanotti has served since 2014 as the state’s attorney for Williamson County.  From 2012-2014, he served as an administrative law judge and arbitrator for the Illinois Workers’ Compensation Commission.  From 2009-2012 he practiced law at the firm Feirich/Mager/Green/Ryan in Carbondale.  He has served as an assistant professor of practice at SIU School of Law since 2018, teaching courses in pre-trial advocacy and client counseling.

David Davis: Davis has been an Inspector and Task Force officer for the Illinois State Police/ Metropolitan Enforcement Group of Southwestern Illinois (MEGSI), based in Fairview Heights, since 2017.  He served as a Supervisory Deputy U.S. Marshal in the SDIL from 2005-2016, as a U.S. Marshals Service Witness Security Inspector from 2003-2004, and as a Deputy U.S. Marshal in the Southern District of Illinois from 1994-2003.  He also served in the U.S. Army Reserve and National Guard for 27 years.  He served as a Special Forces Non-commissioned Officer, deployed to Kosovo and twice to Afghanistan, and was awarded the Bronze Star Medal.

Brad Maxwell: Maxwell has served as the U.S. marshal for the Southern District of Illinois since being confirmed by the U.S. Senate in 2018.  From 2013-2017, he served as a member of the Madison County Board.  From 2011-2018, he worked for Boeing as a Chief of Uniform Security.  He served in the Air Force from 1991-2011, rising to the rank of master sergeant and deploying to Iraq in 2005 where he worked on counterintelligence measures to help secure the trial of Saddam Hussein, and again in 2009, for which he was awarded the Bronze Star Medal for combat operations.

LaDon Reynolds: Reynolds has served as chief of the Oak Park Police Department since 2019.  He has served with the Oak Park Police since 1994, including serving as an officer (1994-2001), sergeant (2001-09), commander (2009-17), deputy chief (2017-18), and acting/interim chief (2018-2019). He serves on the Illinois Law Enforcement Training and Standards Board and the Illinois Commission on Discrimination and Hate Crimes, and he has been an adjunct professor at Triton College and MacCormac College teaching courses in criminal justice.

Gregory Harris: Harris has served as an assistant U.S. attorney in the Central District of Illinois since 2001, including serving as the Chief of the Criminal Division in that office. Harris also served as an AUSA in that office from 1980-1988. From 1988-2001, he was a litigator at the Springfield law firm of Giffin, Winning, Cohen & Bodewes.  From 1976-1979, he worked in the Illinois Office of the State Appellate Defender. He has been a board member of several community organizations and has received numerous awards for his work as a federal prosecutor.

Michael Havera: Havera has served as the State’s Attorney for Christian County since 2012.  He also served from 2008-2012 as the Chief Public Defender for Christian County, having been appointed by the judges of the Illinois Fourth Judicial Circuit to the position.  From 2006-2008, he was an Assistant State’s Attorney for Montgomery County, and from 2005-2006 he was an Assistant Attorney General in the Illinois Attorney General’s Office in Springfield.

Brendan Heffner: Heffner has served as the U.S. Marshal for the Central District of Illinois since being confirmed by the U.S. Senate in 2018.  Previously, he served from 2013-2018 as the Chief of the Bloomington Police Department.  He served in the Illinois State Police from 1989-2010, beginning as a Trooper and rising to the rank of Lieutenant Colonel in the Division of Internal Investigation.  He also worked as an officer in the Normal Police Department from 1985-1989.