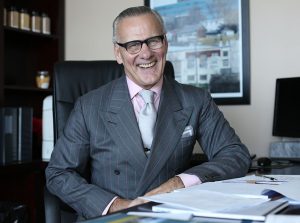 “There are no words to fully capture what the legal community has lost or the impact he had on our lives, especially my own,” said Jayne Conroy, his law partner of more than 30 years. “It will be Paul’s magnanimous spirit, his championing of his clients and colleagues, and his unflinching kindness and decency that will live on in the hearts and minds of all fortunate enough to have known him.”

Hanly dedicated his 40-year legal career to helping others. A trail blazer in the legal industry and gifted trial lawyer, he played a leading role in the settlement of thousands of cases, resulting in recoveries for his clients of more than $1 billion.

For the last 20 years, Hanly represented plaintiffs exclusively. He held key roles in some of the largest multidistrict litigations in the country and helped his clients who were unjustly harmed in every conceivable way: child abuse, defective drugs and devices, toxic exposures, economic conspiracies, and even the terrorism of 9/11.

Most recently, Hanly’s work brought him to the forefront of the unprecedented mass tort litigation seeking to resolve the on-going opioid crisis. He served as the co-lead of the Plaintiffs’ Executive Committee that oversees the prescription opioid multidistrict litigation consolidated in the Northern District of Ohio and, also, held leadership roles in state court litigation.

In 2020, the National Law Journal awarded him its Lifetime Achievement Award, in part, for his work on the opioid litigation. Hanly continued to work on the litigation until his passing.

“All of us at Simmons Hanly Conroy are committed to continuing Paul’s legacy,” said Chairman John Simmons. “We will continue to fight in his memory.”

Hanly earned a Bachelor of Arts degree from Cornell University, his master’s degree in philosophy from Cambridge University and his law degree from Georgetown. After law school, Paul clerked for the Hon. Lawrence A. Whipple, a U.S. District Judge in the District of New Jersey.