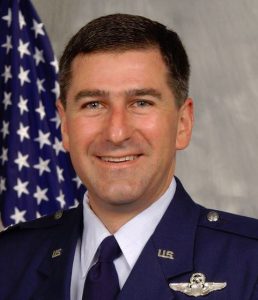 “The Illinois Air National Guard is in the top-tier of readiness across all three of our wings because of the hard work and dedication of our Airmen as well as the outstanding leadership of Pete Nezamis,” said Maj. Gen. Richard Neely, The Adjutant General of Illinois and Commander of the Illinois National Guard. “General Nezamis is an excellent officer and this promotion is well deserved.”

Nezamis spoke of the importance of mentors in his career and in the careers of young officers and Airmen. “There is a time at squadron command when someone says ‘You’ve got to go do this.’ Listen to your mentors,” said Nezamis. “Certain seasoned leaders, many of whom have since passed, saw that potential in me … I was reluctant at times. I wasn’t always ‘yes, yes, yes,’ but they saw something in me that, at the time, I didn’t see in myself.”

He said that all young leaders are going to make mistakes and that good mentors are “there to pick you up when you didn’t do it quite right” and make it a teachable moment.

He advised young leaders to “Be bold. Don’t wait – have a plan. Listen to your mentors. Prepare yourself. Know what want to do versus waiting for the opportunity. Know where you want to be.”

Soon, he said, “you will be seasoned, been mentored, and will be ready to lead others.”

Nezamis thanked Neely for his leadership and confidence in him while expressing gratitude for his family especially his wife Teeshia for her sacrifice, encouragement, and the “pillar” supporting their three sons and “me” all the same time.

As Assistant Adjutant General – Air and Commander of the Illinois Air National Guard, Nezamis is responsible for the command, control and operations of plans and programs affecting more than 3,000 ILANG personnel at Scott Air Force Base, Peoria and Springfield, as well as supervising a full-time force of over 900 state and federal employees. Additionally, Nezamis serves as an Airborne Emergency Action Officer for Commander USSTRATCOM performing periodic alert duties as part of the Battle Staff onboard the USSTRATCOM Airborne Command Post Looking Glass. He is trained as a director of Mobility Operations, and is the vice for the Midwest Region Strategic Planning System and member of the national level Steering Committee.He graduated from Western Michigan University in 1986. In December 1986, he commissioned as a second lieutenant in the Michigan Air National Guard. He completed undergraduate pilot training and was assigned to the 108th Air Refueling Squadron, O’Hare International Airport Air Reserve Station, Illinois, as a KC-135E pilot. He is a command pilot, instructor and evaluator with more than 5,200 flight hours. He has commanded numerous expeditionary operations including the 492nd and the 506th Expeditionary Air Refueling Squadrons and flown more than 275 combat hours in support of several operations including Operations Desert Storm, Enduring Freedom and Iraqi Freedom. Previous commands include 126th Air Refueling Wing Commander, Operations Group commander, and squadron commander. Prior to his current assignment, Nezamis was the chief of the Joint Staff, Illinois National Guard, Camp Lincoln, Springfield, Illinois.

During his career, Nezamis has served in several overseas deployments, including the Middle East, the Balkans and Asia. Maj. Gen. Nezamis is married to Teeshia and has three sons, Nick (Syracuse, N.Y.), Eric (Washington D.C.), and Alex (Reston, Va.).