SCOTT AIR FORCE BASE – Investing in people has been U.S. Air Force Col. Wistaria (Wiz) Joseph’s emphasis and calling since joining the military 35 years ago. 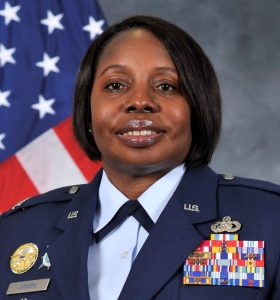 In that time frame, Joseph served in more than 15 manpower and personnel leadership positions – including three command tours of duty – at the squadron, group, wing, headquarters Air Force, and joint staff levels.

Her retirement ceremony will be conducted on Friday, Sept. 11, at U.S. Transportation Command.

For more than three years, she has led- USTRANSCOM’s Manpower and Personnel Directorate, TCJ1, which administers military and civilian workforce plans, policies, programs, organization, and management. Joseph’s impact on the directorate and command, however, will extend well beyond her retirement next month.

For example, seeking to enhance civilian employment processes, she implemented a collaboration with the Defense Logistics Agency on a human resources hiring pilot that began in early 2019. So far, the partnership has proved fruitful, with a 300 percent increase in hires and a 65 percent decrease in hiring timelines from 228 to 79 days.

In addition, Joseph spearheaded a reorganization of the directorate in tandem with developing and executing an internal HR strategy. Following the identification of core values of empowerment, ownership, professional competence, innovation, and care, TCJ1 organized a strategy to produce robust human capital solutions for the command. While working on strategy execution, the directorate focused on achieving human capital objectives such as attracting and acquiring optimal talent, developing and retaining an adaptive, agile, and warfighting-ready staff, and expanding workforce information technology and analysis capabilities.

And as chair of USTRANSCOM’s Human Capital Board, she has provided the means for the command to utilize human capital resources in supporting the organization’s most innovative and pressing priorities, including the Defense Personal Property Program, Transportation Management System, and Global Operations Center.

“The development of the new Human Capital Strategic Plan will significantly benefit USTRANSCOM because it now includes both military and civilian strategic focuses for the command. The primary emphasis is on talent and creating succession plans,” said Joseph. “Also, establishing and working on the tools for TCJ1 such as workforce plan training and predictive and prescriptive HR analysis will create a significant return on investment for the organization.”

Another emphasis area for Joseph has been strengthening the capacity and capability of the TCJ1 enterprise. Similarly, in spring 2017, the USTRANSCOM Commander, retired U.S. Air Force Gen. Darren McDew, hired her to lead the command’s Manpower and Personnel Directorate’s renovation, reinvigoration, and resurgence.

“Col. Joseph brought the right blend of leadership, compassion, and strategic vision to USTRANSCOM. Thanks very much Wiz for your decades of service!” McDew stated.

A native of St. Thomas, U.S. Virgin Islands, Joseph grew up in a military household. Her mother and father served with – and retired from – the VI Army National Guard. Her brother and sister also became soldiers. She, however, participated in the Civil Air Patrol during junior high and high school and that experience prompted her to join the Air Force in 1986. For the next three-plus years, Joseph worked as a personnel specialist at Peterson Air Force Base, Colorado. Following the advice of a fellow airman in her office, she decided to pursue a college degree and an Air Force commission.

In 1993, Joseph graduated from the U.S. Air Force Academy, Colorado Springs, Colorado, with a Bachelor of Science degree in business management, while also initiating her officer career. During the next 27 years, she wore the blue uniform while serving at 11 different installations, including Nellis Air Force Base, Nevada; Travis Air Force Base, California; Dover Air Force Base, Delaware; Vance Air Force Base, Oklahoma; Camp H.M. Smith, Hawaii; Al Dhafra Air Base, United Arab Emirates; Dyess Air Force Base, Texas; and the Pentagon.

Her longest assignment – three and a half years– occurred at Travis from the mid-to-late 1990s. In that time span, Joseph held the positions of deputy director, Manpower and Quality, and chief, Manpower Mission Branch, with the 60th Air Mobility Wing. On the other hand, for the shortest length of duty, she served 10 months as the 436th Airlift Wing’s Exercise Evaluation Team chief at Dover over 21 years ago.

Throughout her more than three-decade Air Force career, Joseph has made the past, present, and future warfighters – both military and civilian – her utmost priority, and in doing so, directly contributed to America’s defense and security from the end of the Cold War to the era of Great Power Competition. And as the airman chapter of her life concludes in September, she looks forward to the next stage of her life, which is in development. But some holdovers from Joseph’s Air Force career – serving others and helping people succeed – will have a significant role in her subsequent professional and personal endeavors.

USTRANSCOM exists as a warfighting combatant command to project and sustain military power at a time and place of the nation’s choosing. Powered by dedicated men and women, we underwrite the lethality of the Joint Force, we advance American interests around the globe, and we provide our nation’s leaders with strategic flexibility to select from multiple options, while creating multiple dilemmas for our adversaries.