As part of executing a federally funded 319 Grant, the annual drawdown of Lake Lou Yaeger will begin early this year, the city of Litchfield announced.

The gates will be opened following Labor Day weekend on Tuesday, Sept. 8.  All members of the public should be advised that any watercraft stored on the lake should be removed no later than Sept.  9 to avoid being stranded on the lake. 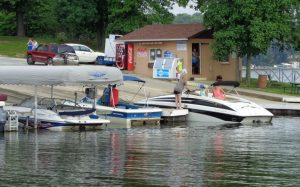 Lake residents and Lakefront Camping Lot Leaseholders may wish to capitalize on the unique opportunity do shoreline maintenance and make dock repairs while the lake is dropped this early in the season.

Smaller fishing vessels and other small watercraft may still utilize the lake at their own risk as is common practice during the winter season while the lake level is drawn down.

The Lake Department expects Lake Lou Yaeger to be drawn down approximately 4 to 5 feet below the normal “full-pool” levels.  This level could be affected by excessive precipitation.

Anyone needing more information about the topic should contact the Litchfield Lake Department at (217) 324-5832 or email elamb@cityoflitchfieldil.com