SCOTT AIR FORCE BASE –  For the past 32 years, Doron Bard, senior foreign policy advisor, U.S. Transportation Command, has served as a career diplomat with the Department of State, advancing America’s relationships with several nations around the world.

And since August 2018, Bard has shared his vast diplomatic experience and expertise with USTRANSCOM and its component commands, providing foreign policy guidance on the organization’s global missions and commander’s international engagements.

He departs the command this month, but his impact and influence, particularly in increasing the organization’s bonds with relevant DOS offices, while also strengthening diplomatic support to our nation’s warfighters, will continue to resonate inside and outside of USTRANSCOM.

“The USTRANSCOM assignment has been a unique, rewarding, and enlightening opportunity, especially being a DOS employee. I’ve learned much about the significant interaction and cooperation between DOS and DOD, as well as the key role the USTRANSCOM and other combatant commands play in supporting U.S. diplomatic initiatives,” said Bard (shown). “I also now have an enhanced understanding, and appreciation for, the importance of the commercial transportation industry – air, sea, and ground – to military mobility.”

As the command’s senior POLAD, he led a four-person staff, consisting of two deputies – one from DOS and the other from another federal government agency – and an administrative assistant.

Highlights from Bard’s almost two-year USTRANSCOM tour include initiating a mechanism aimed at identifying new political and economic conditions in individual countries to be factored into command posture planning, as well as further integrating the POLAD into senior leadership decision-making.  One of those command leaders, U.S. Navy Capt. Henry Stephenson, director, USTRANSCOM’s Intelligence Directorate, worked in tandem with Bard in addressing the implications of geopolitical challenges – current and emerging – on command strategy, policy, and operations. 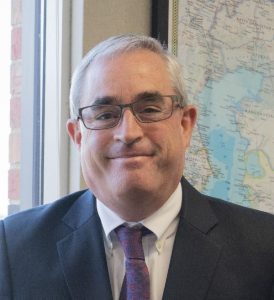 “Most intelligence professionals learn early-on the critical role the Department of State plays in our national security, as well as the competence and dedication of our Foreign Service officers.  One of my first initiatives after I arrived in 2018 was to invite Doron to join our daily analytic huddles, where he used his experience, insights, and access to embassy reporting to improve our understanding of the strategic environment,” stated Stephenson. “I’m sorry to see him move on, but I know State has a deep bench of professionals to fill his place.”

During his more than three-decade DOS service, Bard has participated in seven overseas assignments and three tours at DOS headquarters in Washington, D.C. Prior to joining USTRANSCOM, he was consular chief, U.S. Consulate General, Guangzhou, People’s Republic of China, for three years. He has also held positions in Moscow, Johannesburg, Seoul, Calgary, Tel Aviv, and Oslo.  Bard speaks Norwegian and Hebrew, as well as some Russian and Mandarin Chinese.

His next chapter professionally will be as the countrywide consular coordinator, U.S. Consulate General, Ho Chi Minh City, Socialist Republic of Vietnam.

“While serving as the command’s POLAD the past 23 months, I prioritized collaboration with other elements in USTRANSCOM and also tried hard to ensure pertinent reporting from DOS and its posts in the field had an audience within the command,” Bard said. “Ultimately, the partnership between DOS and DOD benefits both organizations, but also, and most importantly, America’s international relations, defense, and security.”

USTRANSCOM exists as a warfighting combatant command to project and sustain military power at a time and place of the nation’s choosing. Powered by dedicated men and women, we underwrite the lethality of the Joint Force, we advance American interests around the globe, and we provide our nation’s leaders with strategic flexibility to select from multiple options, while creating multiple dilemmas for our adversaries.