“Ever since I was a little girl, I had an interest in the legal field, and as I grew older eventually my older sister became a paralegal and I decided to pursue the same career,” Britt said.

Britt was sworn in as student trustee at the May 19 board meeting. She was elected in April by LCCC students.  As the student trustee, she provides a student perspective on the college board; and gives college general updates and information to the Student Government Association.

She is thriving in the learning environment at LCCC. She has already earned her certification in Social Media Marketing. Now, she is working on two Associate in Applied Science degrees, one in paralegal and the other in criminal justice.

“The professors are super friendly and helpful to students, and they create impactful learning experiences that help us develop our skills in class,” Britt said. “You get a wonderful education for a fraction of the tuition that would be charged at a four-year college.”

Britt is no stranger to campus life. She is a staff member of the student newspaper, The Bridge; she has served on the Student Government Association since 2017 and is a former SGA president; and she is also involved with Student Activities. 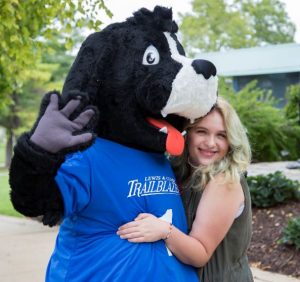 “I have had the privilege of working with Ashtyn on several student initiatives through her involvement in SGA and other student groups,” said Vice President of Student Engagement Sean Hill. “She has proven on repeated occasions that she cares about our students and this institution.

As a Bridge staff member, Britt has earned several awards from the Illinois Community College Journalism Association, including a first place in the Arts Review category; second place and third place awards for Headline Writing; second place awards for Editorial Writer of the Year and for hosting the Bride Podcast; and honorable mentions for News Story of the Year and Editorial Writer of the Year.

She has also received two LCCC Honors Banquet Awards for Excellence in Editorial Writing and one for Outstanding Leadership.

Britt said LCCC has definitely changed her life for the better.

“Through L&C, I have gained a lot of wonderful experience, a proper education and have evolved completely from the person I had been before I came to school here,” she said.

Ultimately, she would like to graduate with a bachelor’s degree in Criminal Justice from Missouri Baptist University through LCCC’s 2+2 program. She said she may someday choose to go back to school to become a lawyer and would like to also write a book or two.

“My late mother wanted for me to be an independent, educated, and self-sufficient woman,” Britt said. “I believe I have fulfilled her wish and hope she looks down on me and smiles with pride.”

PHOTO: A photo op with the campus mascot for Ashtyn Britt.