PHOTO: State Rep. Terri Bryant, R-Murphysboro, speaks during a video news conference Thursday about the effort she is leading to have the Illinois Department of Employment Security audited. (Credit: blueroomstream.com)

SPRINGFIELD – A group of four Republican state representatives is calling for a state audit of the Illinois Department of Employment Security to examine a data breach at the agency and its continued slow adaptation to the unprecedented number of unemployment claims during the COVID-19 pandemic. 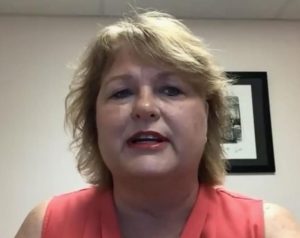 “There was a failure from day one, and now is the source of a data breach. These are unacceptable failures,” said state Rep. Terri Bryant, R-Murphysboro, in a virtual news conference Thursday.

She was joined by state Reps. Mike Marron of Fithian, Charlie Meier of Okawville and Brad Stephens of Rosemont.

Two weeks ago, Bryant alerted the governor’s office to a data breach at IDES after she received “a panicked phone call” from one of her constituents who accidentally accessed personal information of other applicants for the Pandemic Unemployment Assistance program.

Bryant said after she alerted the governor’s staff, IDES’ director reached out to the constituent, who then told Bryant she could no longer access the forbidden information.

“I believed at that time that the issue had been resolved,” Bryant said. The next day, however, she received a reply from a governor’s office staffer that said officials were aware of the problem and still working to fix it.

Bryant, however, is not satisfied.

“I have been very disappointed with the attitude the governor has had during his daily press briefings on the breach and the failures at IDES overall,” Bryant said. “To hear it from the governor, you’d think everything’s OK, everything’s working just fine.”

Bryant and her three fellow House Republicans plan to file a resolution that would instruct Auditor General Frank Mautino to complete a full audit of IDES, although Bryant said she wants Pritzker to fix the IDES problems before legislators get involved.

Lawmakers also took issue Thursday with the no-bid nature of the two contracts – worth a combined $22 million – the state awarded to London-based Deloitte Consulting to set up Illinois’ PUA system. The firm subcontracted with companies to hire employees in Texas and Chicago, according to WBEZ radio in Chicago.

“This contract should have been put out for bid,” Meier said. “We want to know the facts, the truth about the failures at IDES with Deloitte, as oftentimes what a state agency says does not accurately reflect what happened.”

“Now that (business owners) need help and relief after voluntarily closing their businesses to comply with the governor’s executive order, they are extremely frustrated that the governor hasn’t committed the same effort to make the system work,” Marron said.

Stephens said his suburban Chicago constituents have been disproportionately hurt by the stay-at-home order, as his district is adjacent to O’Hare International Airport “along with numerous convention facilities, entertainment centers, hotels, restaurants and bars.”

“Several thousands of families have played by the rules and are depending on the unemployment system and still haven’t received benefits,” he said. “How are they supposed to put food on the table when the IDES website continues to crash, folks are still unable to call into the automated phone system and now some offices are closed?”

Meier said one of his constituents this week has called IDES more than 100 times, and another 364 times, but they still have yet to get through to an agency representative.

“And here we are two-and-a-half months later and we have people who haven’t had any income since the governor’s shutdown,” he said.

Lawmakers called for manpower and resources as specific fixes to these problems.

“Put enough people in there at the very least to make sure that the calls are getting answered,” Bryant said, “and train the people well enough that they’re able to answer individuals’ questions in a respectful manner and point them in the right direction.”

Pritzker during his daily COVID-19 briefing Thursday said Illinois’ staffing and systems challenges are not unique among states, and he reiterated the number of claims filed has been unprecedented and unexpected.

“Again, we’ve been trying to build that ship and float that boat at the same time,” he said.

On Tuesday, IDES opened 45 “program representative” jobs in 23 locations to assist workers and businesses affected by COVID-19. This is on top of the 512 employees it already has taking claims, per reporting from CBS TV-2 Chicago.

The U.S. Department of Labor on Thursday reported another 58,359 Illinoisans filed for unemployment in the week ending May 23, and another 764,194 renewed their claims.

On Republicans’ call for an audit, Pritzker said, “If their goal is to figure out what didn’t work right, I have stood here I don’t know how many times over the last two-plus months and told people what hasn’t worked right and how we’ve been trying to address it.”

Marron said an audit is an “extraordinary” but necessary step because “the governor has repeatedly refused to come to the table.”

“An honest assessment of the situation and the department’s shortcomings is the key to getting this unacceptable situation under control,” he said.