Bryan Johnson was barely on board as the new director this spring when operations at MidAmerica St. Louis Airport came to a drastic slowdown, thanks to a worldwide virus.

Johnson on April 3 took over the post held by Tim Cantwell, who retired after 17 years.

Any plans he brought with him have been affected by the same COVID-19 that’s affected the entire globe.

“We’re faced with having to react as things change weekly and sometimes daily,” he said. “It’s a unique time that none of us has lived through before.”

The airport stands to get $3.6 million through the CARES Act, the Department of Transportation and the Federal Aviation Administration, which will go toward operations and other projects deemed qualified for use.

Johnson said he remains determined to build on the growth that the airport has been enjoying for the past several years, including passenger flight service, cargo hauling and tenancy.

Operations, from the air carrier side, have dropped almost 90 percent since the virus onset, he said. The month of May could be a continuation. 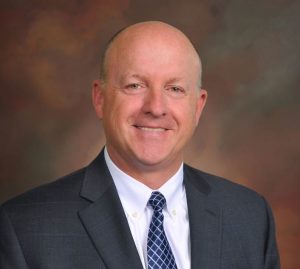 The timing of the virus was terrible. MidAmerica has been on a roll in recent years, gaining more flights and increasing cargo capacity.

“That was one of the attractions for me, personally, to put my hat in the ring here, with the significant growth. It’s very unusual. Rarely do you see 15 to 20 percent year over year and we were looking forward to jumping in and carrying that flag.”

Johnson has about 25 years of airport experience and about 30 in the industry overall, most of it in management. He has worked at a variety of large hubs and smaller airports. Johnson was most recently senior member for Aviation Management Consulting Group in Centennial, Colo. Before that, he was director of Rocky Mountain Metropolitan Airport in Broomfield, Colo. Prior to that, he was the assistant director of aviation at Quad City International Airport in Moline, Ill.

Johnson had some ideas to improve on airport operations, primarily air service development and cargo. MidAmerica is home to two major tenants, Northbay and Produce and Boeing Co., and two smaller ones, the State of Illinois, which has a patrol plane based there, and AVMATs, which works on smaller aircraft.

Until the pandemic set in, Allegiant had been discussing the possibility of building a base of operations at MidAmerica, which would mean additional employees and aircraft. Allegiant describes itself as an ultra-low cost carrier and attracts passengers from about a 300-mile radius of the airport. Its annual enplanements (paying passengers) were nearing 200,000 when the virus struck, and that trend would indicate that other carriers will eventually want to be a part of the local scene, when things return to normal.

Construction continues at the airport on projects that were budgeted and preplanned, including terminal modifications, expanding the passenger parking lot and road improvements.

This story is part of a special section dedicated to the St. Louis Regional Freightway that appears in the May issue of the Illinois Business Journal, which covers the business of Southwestern Illinois. Go to Current Edition archives for the entire section.