The chief executive of the parent company for Argosy Casino in Alton and two casinos in the St. Louis market said more than 26,000 workers will be furloughed at Penn National Gaming starting Wednesday.

“The past few weeks have been a very stressful time for all of us,” Jay Snowden, president and chief executive officer of Penn National said in a statement this week. “What began as a great start to 2020 has us now facing an unimaginable new challenge. I remember the impact of past economic crises, such as the 2008/2009 recession, but those don’t compare to the toll COVID-19 has taken on the gaming and hospitality sector. According to a report from Moody’s Investor Services, the gaming industry is second only to the major airlines in terms of the most impacted industries by the pandemic.” 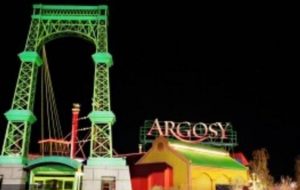 Penn National’s properties locally include Argosy in Alton, which has been one of the community’s largest employers, the Hollywood Casino in Maryland Heights, Mo., and River City Casino in south St. Louis.

“With all of our 41 properties in 19 states temporarily shuttered, we are making difficult decisions to help preserve our liquidity and ensure a brighter future for our Company’s team members, customers, shareholders and other key stakeholders. As CEO, I am committed to doing everything in my power to ensure we persevere and figure out a way to come out of this stronger and better than ever,” the statement said.

Since having to suspend operations, Penn National has continued to pay its employees full wages and benefits through March 31. However, several states have announced extensions of their temporary closure orders and other states may soon follow suit.

“Given the uncertainty about the duration of the pandemic, and with no meaningful revenue for the foreseeable future, Penn National will be implementing unpaid furloughs impacting approximately 26,000 team members companywide beginning April 1,” Snowden said.

To try to help ease some of the burden, the company is maintaining medical benefits for eligible team members through June 30.

In addition, Penn National has established a special COVID-19 Emergency Relief Fund under its Penn National Gaming Foundation to provide direct assistance to team members and local relief organizations in need in its communities.

“We have already raised over $1.2 million in dedicated relief funds, including more than $425,000 in personal contributions from me and my senior management team, our Board of Directors, and our GMs. We will continue to work tirelessly to grow these relief funds over the coming days and weeks,” he said.

Since closing doors in mid-March, Penn’s properties have donated more than 45 tons of food to local food banks and homeless shelters, ensuring that its perishable food items would go to help those in need.

“In addition, our properties have donated thousands of unused masks and surgical gloves to first responders and health care providers. In times of crisis, we come together.”

Penn National is taking additional short-term actions to reduce its cost structure during the property closures:

• Immediate, “meaningful pay cuts” for Snowden and the remaining property and corporate leadership teams, until such time as properties have substantially returned to normal operations;

• The board of directors has elected to forgo any of its cash compensation until such time as properties have substantially returned to normal;

• The majority of corporate team members will also be furloughed, and we’ll be operating with a “minimum, mission critical staffing” of less than 850 team members companywide during the closures.

The company also announced a series of business moves involving its operating structure.

On Monday it announced an agreement with its principal landlord, Gaming & Leisure Properties involving the sale of the Tropicana Las Vegas real estate assets (it will continue to operate the facility) and a new ground lease for its planned Category 4 casino in Morgantown, Pennsylvania, in exchange for $337.5 million in rent credits.

“In addition, the deal includes an option for us to acquire the operations of GLPI’s Hollywood Casino in Perryville, Maryland at a future date. We greatly appreciate the cooperation, creativity and partnership shown by GLPI during this challenging time,” Snowden said.

“While this transaction will help to relieve liquidity pressure in terms of rent obligations, we are committed to taking further steps to reduce our ongoing operating expenses in order to ensure we have a healthy business to return to when we are able to reopen our doors,” said Snowden.