Illinois lawmakers moved forward Tuesday with legislation that would require high-voltage outlets to be installed in most new construction, renovations, and a significant portion of all parking garages to allow for electric car charging.

House Bill 4284 is similar to a mandate in California. It requires any new residential construction to have a dedicated circuit that runs to the garage or all parking spaces to make it “electric vehicle ready.” 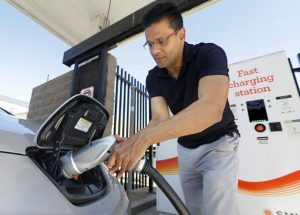 Any new residential property with six or fewer parking spaces would have to have a dedicated outlet for each spot under the terms of the bill.

Fewer than 8,000 electric vehicles were registered in Illinois in 2017, according to the U.S. Department of Energy. Electric vehicles can use a normal outlet, but charge faster with a 240-volt outlet similar to an electric dryer outlet.

Sponsor Robyn Gabel said Tuesday that requiring most parking spaces to be wired to accept electric vehicle charging would represent a step away from light use combustible engines that account for the majority of carbon pollution in the state.

“Greater electric vehicle adoption will immediately cut transportation emissions with today’s grid and can completely eliminate emissions with a clean grid,” she said.

For commercial parking spots, advocates estimated that making one “EV ready” would cost $900 for each outlet, but only if done from the onset. Retrofitting would be significantly more expensive.

Republican Deanne Mazzochi, who related the cost her company incurred for attempting to wire three spaces in a parking garage reached more than $1 million, said the measure would increase the cost for new constructions, renovations and garages.

“This is an extremely costly proposal,” she said.

The bill passed and now awaits a vote on the House floor.