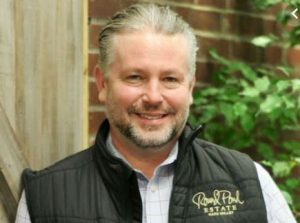 Reed joined Round Pond Estate in January 2015 as Midwest regional sales manager before being promoted to Eastern Division sales manager in May 2017, then national sales manager in March 2018.  Before joining Round Pond Estate, Reed spent time with other wineries and importers including C. Mondavi & Sons and Casa Vinicola Zonin, along with past experience in the Finger Lakes wine region, wholesale and retail industries. Over the past five years Cline has been mentoring and grooming Reed to take over the national and international director of sales’ role.

“Scott’s wealth of knowledge and passion for the wine industry distinguishes him as a respected expert in the field,” says Miles MacDonnell. “He has been a fantastic part of our team and I know under his leadership going forward, the wholesale team will continue to deliver great results.”

Before joining the Round Pond Estate team in May 2012, Cline was sales director at Stag’s Leap Wine Cellars from 1986-2001, Vice President of Sales and Marketing at HALL Wines from 2003-2009, and operated her own wine sales and marketing consulting company, WineDi Consulting, from 2009-2012. Under her leadership the Round Pond Estate wholesale channel expanded into national distribution in eighteen months and achieved phenomenal results year over year. Cline will be staying on in a limited capacity to ensure a smooth transition and lead some select wholesale projects.

Reed (shown) was born and raised in Quincy, Ill., a son of Dan and Pat Reed, and currently lives in Edwardsville with his wife Laura. They have three daughters, Autumn, Ashton and Ella, along with their newest edition, grandson Jameson Scott Abram.

Round Pond Estate is owned and operated today by the second generation of the MacDonnell family. Round Pond Estate is a widely recognized Cabernet Sauvignon producer in the heart of Napa Valley. The family has been growing wine grapes in Napa’s acclaimed Rutherford region for more than 40 years.