A Belleville student and nine other winners, ages 12 to 72, will have their artwork installed on MetroBus shelters throughout the region.

The fifth year of MetroScapes is proving to be a year filled with firsts for the Arts in Transit, Inc. program that annually selects 10 local artists whose winning artwork is showcased on the Metro Transit system for the next year.

Aside from the fact that total submissions soared to 471, among this year’s winners are the first ever husband and wife to each be selected as winners, along with an artist who marked another first as the only person to have her artwork selected in three different years of the program. The winning artists for 2019 include amateurs and professionals from across the St. Louis region.

The artwork will soon be installed at up to 100 MetroBus shelters across the St. Louis region. The winning artworks, selected by a panel of artists and art professionals, will remain on display for a year.

Tim Boyle, chairman of the Arts in Transit, Inc. Board of Directors, said the winning artworks will be viewed thousands of times by thousands of people using the Metro Transit system or who travel past the bus stops. He said their work is a win for the community too.

“We’re all winners, because we all get to revel in your creativity,” Boyle said.

That creativity took many shapes and forms this year, with mediums ranging from photographs, digital and mixed media to oil pastels, acrylic painting and ink on paper. The inspiration for each piece was just as varied.

For Diawly, a 6th grader at Barack Obama Elementary in Pine Lawn, Mo., that inspiration came from Manal Ali-Sharif, the women’s rights activist from Saudi Arabia who helped start a women’s right-to-drive campaign in 2011. Diawly actually created the artwork when she was a 5th grade student at Jefferson Elementary School, and her colorful depiction of the activist behind the wheel was intended to motivate others the way that she herself was inspired by Ali-Sharif.

“My painting wasn’t just about winning. I put kind and heart into it,” said Diawly. “You should just go out and express yourself.”

The ink on paper drawing titled (ECAEP EVAH SU TEL) depicts two linked hands of different shades reaching out from two clusters of multiple hands of varying shades. It represents peace on earth to Quinton Davis, the artist who created it and creatively named it “Let us have peace” spelled backwards. The 17-year old high school senior from Belleville, said his original inspiration stemmed from the fact that there is so much unrest in the country, racial and otherwise.

“What I saw is that there is such a need for peace in our world,” Davis said. “The image represents people from all backgrounds, races and stretches of life reaching out to each other. I want people who see it to be able to think of a future where people would have a kind of Utopia, where people have gotten past a lot of the things that keep us from coming together and loving each other.”

Rainbow Trail is a colorful photograph captured by Taylor McIntosh of St. Peters, Mo., during the Pride STL parade this summer. It shows the legs of a group of people walking during the parade as the shadow of a falling rainbow flag hits the ground behind them, creating the illusion that the people are leaving a rainbow trail. She says she expected most people would be focused on capturing the image of the flag falling, so she was shooting for something different.

“I like how the flag draping from the top of the image gives it movement, and the people walking creates movement too,” McIntosh said.

For Jason Hoeing of Shrewsbury, Mo., the inspiration for his mixed media entry Lotus Folds came from his desire to repurpose pieces of approximately 20 other prior projects that he cut up and mixed with other elements, whether from one of his children’s old paintings or a map from his mother’s house or something else from one of his bins of scraps. The end result is a collage effect where the different elements create shadows, giving the piece depth. Having earned degrees in art and now working as a teacher, he notes that creating this type of work reflects his profession turning into a passion.

“My work before was too serious,” said Hoeing. “I had kids and suddenly I wanted to play; I reconnected to the playful aspect.”

Among the other 2019 winners who will have their artwork featured on the Metro Transit system over the next year are:

*   Cary Horton (Shrewsbury, Mo.), joins her husband Jason Hoeing in the winners’ circle. She captured her first MetroScapes win with her digital photograph Carr School. Her winning entry depicts “the fantastical, cool-looking Carr School buildings, ravaged by time and neglect, yet in some areas covered in vines or caught in the late summer light – like something out of a dream, and the reality, an entire region of the City of St. Louis destroyed and depopulated by de-industrialism, white flight to the suburbs and racism.”

*   Angela Vories (St. Louis, Mo.), is a student at Florissant Valley Community College working toward a degree in fine art photography, whose vibrant artwork titled Querencia made her a three-time winner in the MetroScapes contest. She describes Querencia as a place where people find their most authentic self and the image depicts her African sister Valerie, standing on a train very confident yet unassuming, as it embodies her and her culture.

*   Morgan Hill (St. Louis, Mo.,) graduated from Southern Illinois University Edwardsville with a Bachelor of Fine Arts in Textiles and currently works on the administrative side of the industry at the Regional Arts Commission. To create Rome’s Chicken, she used computer generation to juxtapose ancient ruins over a scene of a Fish and Chicken spot on Natural Bridge Road in north St. Louis, with the hope of having people reimagine the concept of traditionally valued landscapes, like those of the Roman ruins, by fusing them with dilapidated buildings photographed in North St. Louis County.

*   Patricia Brewer (Chesterfield, Mo.), created Red Window. Her inspiration came from seeing the morning light shining through the window on a plant that she felt needed to be painted on red Canson paper.

*   Irek Szelag (Ballwin, Mo.), created an oil painting on canvas titled St. Louis Art Museum with Monument. Szelag, who says he has been painting for many years, moved to St. Louis from Poland in 1988 and notes the amazing architecture of the city has been the creative inspiration for many of his works. He also runs Szelag Art Conservation, Inc. in Overland, Mo., which specializes in restoration of various works of art.

The integration of artwork at bus shelters provides inspiration for transit riders who are waiting to catch their bus to work, to school, to get groceries or to fun destinations, said Ted Zimmerman, vice president of Marketing and Communications at Bi-State Development. Metro Transit is a Bi-State Development operation.

“To you, our winners, I say thank you for inspiring St. Louis and for inspiring our riders across the transit system,” Zimmerman said. “Through MetroScapes, there are great opportunities to see the wonderful art that comes from so many diverse backgrounds, and that’s what we want to be able to celebrate.”

The 2019 MetroScapes program is supported by funding from the Gateway Foundation. There was no fee for artists to submit up to three original entries for the MetroScapes competition, making it rather unique among art contests and helping to attract 471 submissions from 224 artists who all who live within a 50 mile radius of St. Louis. For more information about MetroScapes, and to view this year’s winning works of art and artwork from previous MetroScapes, visit artsintransit.org. 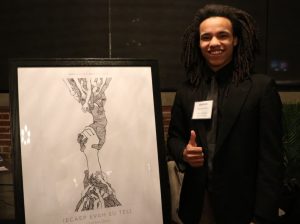 Quinton Davis, of Belleville, with his artwork, called “ECAEP EVAH SU TEL,” which is Let Us Have Peace spelled backwards.