As a leader, volunteer, advisor and donor, he is said to have inspired and guided others to give millions of dollars in support of a wide variety of charities throughout the St. Louis region. 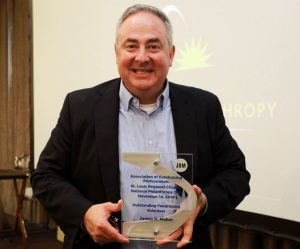 He is a member of the Missouri Bar, The National Center for Employee Ownership and Vistage. He is president of the St. Louis Chapter – Exit Planning Institute and serves on the Leadership Council of Southwestern Illinois.

In 2009, Maher was named “Donor Advisor of the Year” by Leave a Legacy, Planned Giving Council and The Greater St. Louis Community Foundation. He has received awards from several other organizations, including the American Red Cross and Saint Louis University.

He currently serves and has served on the boards of the following St. Louis regional non-profit organizations:

·      The Greater Belleville Chamber of Commerce

·      United Way Auxiliary Board of Directors

In 2017, Maher launched Archford Angels, which has made nearly 50 financial contributions to area non-profits, generating over $400,000 in donations and grants, while instilling in his staff a greater appreciation for the meaningful work being accomplished by regional non-profits.

“It is inspiring to see the talented members of our team engage with nonprofits driving impactful and sustainable programs. I simply marvel at the personal development of the team members when they describe their projects,” said Maher. “We are very proud of this program and its contribution to the community nonprofits.”

Consistent with his philanthropic approach to life, he recently launched Gifting Insider, which simplifies the gifting process to achieve impactful best interest gifting to benefit donors and nonprofits. Gifting Insider creates donor literacy through education and creates a donor compliant relationship with nonprofits and foundations.  To learn more about this initiative, visit giftinginsider.com.