We’ve got some disappointing news for consumers: you shouldn’t give up your driver’s license and trade it in for a robot car just yet. Although news outlets across the country have been breathlessly reporting the imminent arrival of self-driving cars, you’ll need to keep your eyes on the road for the foreseeable future. Articles predicting changes in commuting patterns, economic disruption for truck drivers, and a 100 percent reduction in car crashes far overestimate the status of today’s technology, and they neglect to analyze the very real technical challenges of fully replacing human drivers with robots. 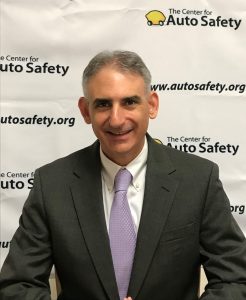 One state that has both embraced the potential benefits of self-driving cars while keeping in mind that they’re not ready for prime time yet is Illinois. Last year, the Governor signed an executive order setting up parameters for the testing of self-driving vehicles in the state, including requiring a driver behind the wheel at all times.

Unfortunately, leadership at the federal level, unlike that of the Prairie State, has skipped the old maxim of trust-but-verify and gone right to “in driverless-car companies we trust.” In recent months the National Highway Traffic Safety Administration has moved to roll back federal safety regulations in order to accelerate the sale of self-driving cars, despite a lack of evidence that vehicles lacking manual controls are safe. This effort to deregulate, combined with the existing and highly questionable federal policy of allowing the testing of driverless cars anywhere in the U.S., creates risks that go beyond sharing the road with these vehicles.

The reality is that there’s not much evidence today’s “self-driving” cars are any safer than cars with drivers. This means that when — not if — they crash, the collateral damage could include long-term consumer trust in the technology and whatever safety gains it may bring. Most autonomous vehicle experts, including many who work for driverless technology manufacturers, agree that these vehicles are not ready to hit the roads without training wheels. Yet, this consensus has not stopped the rush to get them on the street with little adult supervision.

Since 1970, the Center for Auto Safety has been a champion of innovations that increase the safety of drivers, riders, pedestrians, and other vulnerable road users across America. The faster that effective, advanced, safety technology is deployed, the better it is for everyone. Self-driving cars can reduce the deaths and injuries that result from car crashes, but only if the technology is introduced in a way that avoids a rush to market before safety has been assured.

Already, permitting reckless testing has resulted in the death of Elaine Herzberg, a pedestrian who died after being struck by an Uber self-driving car in Tempe, Ariz., in March 2018. A year later, in March 2019, Jeremy Banner was killed when his Tesla, in “autopilot” mode, crashed into a truck on a Florida highway. While the final report is not yet in, Mr. Banner’s crash looks very similar to other Tesla owners who have been overly reliant on not-actually driverless advanced driver assist systems. Despite these tragedies, which have been due in part to an overreliance on immature technology, manufacturers and even some members of Congress still seem ready to race towards the “next big thing” regardless of its cost in human lives.

Americans deserve better. Our political leaders have the opportunity to act now to facilitate the development of safe, driverless cars, by legislation or regulation, before the next tragedy. Driverless vehicles need licensing requirements and objective validation tests the same way they are currently required for all human drivers and vehicles. Humans must pass vision tests, and so should driverless vehicles. If cars are to be computers on wheels, then they must meet stringent cybersecurity standards to avoid being hacked. If self-driving vehicles are all about safety, then it should not be difficult to prove they are road worthy.

Yet, some recent proposals seem to take the position that allowing unproven driverless vehicles on our roads is so important that we can worry about rules designed to ensure safety after the fact. The auto and technology industries have endorsed proposals that would remove states’ rights to exercise their traditional authority over the operation of motor vehicles within their borders, including current reasonable restrictions on the books in Illinois. Rules governing driverless vehicles on our roads must encompass responsible treatment of self-driving cars, so that when they are finally ready to hit the streets, they will avoid hitting people at the same time.

More than 37,000 people die every year as result of car crashes in the U.S. They are the leading cause of death for those between 5 and 24 years old, and pedestrian deaths are on the rise. We must embrace every opportunity to reduce these tragedies. There is no doubt that self-driving technology has the potential to revolutionize American transportation over the next 100 years, increasing safety, accessibility and mobility. That makes it even more important for legislators and self-driving car companies to take seriously their responsibility to integrate this technology into society safely.

Jason Levine is the executive director of the Center for Auto Safety, a Washington, D.C.-based non-profit consumer advocacy organization. He wrote this column at the request of the Illinois Business Journal. Visit www.autosafety.org

This column appears in the October issue of the Illinois Business Journal.