Gov. J.B. Pritzker has activated an additional 200 Illinois National Guard soldiers for State Active Duty to engage in the state’s active flood fight along the Illinois and Mississippi rivers. This comes as the U.S. Army Corps of Engineers confirms an overtopping at the Nutwood Levee, which forced the closure of Illinois State Route 16 at the Joe Page Bridge near Hardin.

In all, more than 400 guardsmen are reinforcing the state’s efforts to fight raging floodwaters as more precipitation takes aim on river communities.

“The State of Illinois will use every resource at its disposal to protect our residents and our communities from devastating floods,” said Pritzker. “As we continue to strengthen our levees in west-central Illinois, we must also plan and prepare for this force of nature to move downstream to our southern Illinois communities. These soldiers will help not only bolster our current numbers on the ground, but allow us to pre-position key assets in downstream communities to prepare for what’s to come in the days ahead.”

On Tuesday, state and local leaders joined Pritzker, Illinois Emergency Management Agency Acting Director Alicia Tate-Nadeau, Illinois Department of Transportation Secretary Omer Osmen, Illinois Department of Agriculture Director John Sullivan and Director of the Illinois National Guard Joint Staff Michael Glisson for an operational briefing at the State’s Unified Area Command in Winchester. The briefing included updates on the health and stability of levees by the U.S. Army Corps of Engineers, troop deployments and mission overviews from the Illinois National Guard and a report on deployed state assets. To date, the state of Illinois has provided more than three million sandbags, more than 2,700 rolls of plastic, 27 pumps and five dozen IDOC offenders to assist local communities as they fight rising floodwaters and protect our state’s critical infrastructure.

“The State of Illinois has been victim to a seemingly constant wave of storms that have generated significant rainfall, extreme levee saturation and devastating river flooding,” said Tate-Nadeau. “Our priority has been protecting the life, health and safety of our state’s residents. As we press forward, our local and state emergency managers remain steadfast and committed to protecting our state’s critical infrastructure which helps to ensure continuity of key community lifelines.”

With additional precipitation in the forecast, river levels will continue to rise in areas along parts of the Illinois and Mississippi rivers. Emergency Management officials are advising residents in river communities to have a family evacuation-plan in place, in the event an evacuation is necessary due to rising floodwaters. 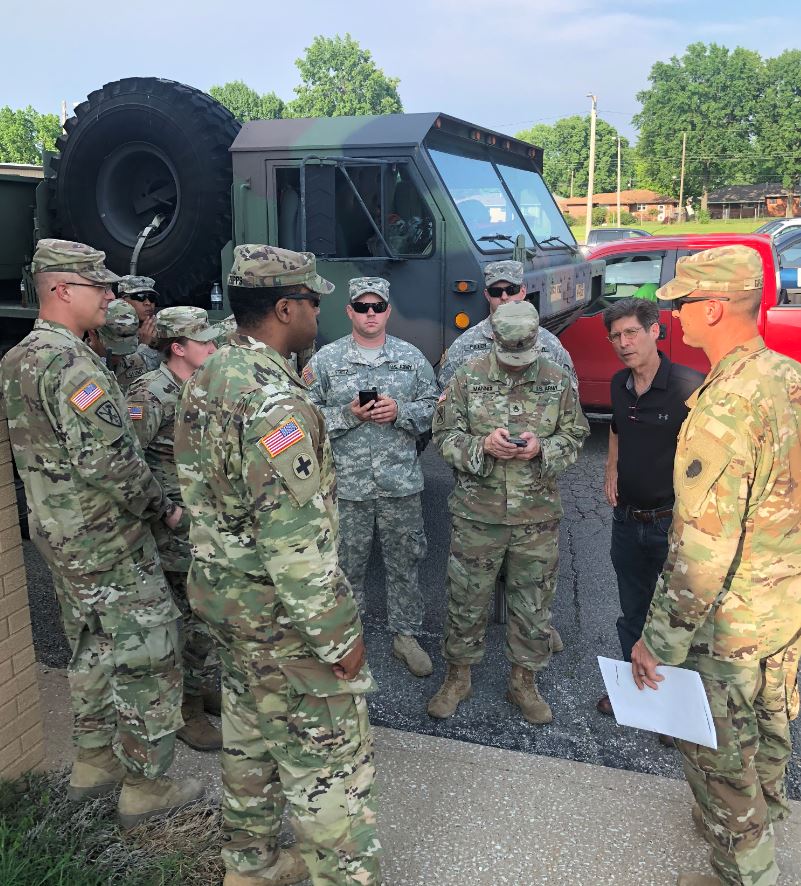 WOOD RIVER — Emergency officials are asking the public to stay off the levees in Madison County.

After meetings between Madison County Emergency Management Agency, the U.S. Army Corps of Engineers, Wood River Drainage and Levee District and Metro East Sanitary District all agreed and safety measures were implemented to protect the levee system throughout the county.

“There is no trespassing on the levees,” Tony Falconio, logistics coordinator for Madison County EMA, said.

Local law enforcement, Madison County Sheriff’s Department and the Illinois National Guard will be patrolling and monitoring the levee system.

“If you are not authorized to be on the levee system, you will be asked to leave,” Falconio said.

The no trespassing rule applies to all pedestrians, bicyclists and any type of motor vehicle. These steps are being taken as a preventative measure to ensure that the integrity of levee system is maintained.

“Only authorized personnel will be allowed on the levees,” Falconio said. “People will be asked to leave and if they chose not to leave law enforcement will be notified.”

Chairman Kurt Prenzler said he is confident in the county’s levee system.

“The levees are in better shape now than they were in 2016,” Prenzler said.

Prenzler said there has been $100 million in levee improvements during the past decade.

“The levees are performing as designed,” he said.

Prenzler called for the National Guard to make sure the levees remained protected. A detachment of soldiers from the 2nd Battalion, 123 Field Artillery Regiment arrived Saturday and by Sunday they were on the levees.

“There are soldiers at various points along the levee keeping an eye on things as well as making sure people stay off the levees,” Prenzler said.

Prenzler approved the use of county funds for increased patrol by Madison County Sheriff deputies to support the effort of the National Guard.

“This is not the time for sightseeing or anything else,” Adler said.

Alton Police Chief Jason Simmons also wants to remind people who are visiting downtown Alton to see the flood to stay clear of the floodwall. There were reports of people climbing on the wall and anyone caught going beyond the yellow caution tape will be arrested for criminal trespassing.

Falconio said to keep the most up-to-date with the county’s EMA they can visit its Facebook page at www.facebook.com/MadCoEMA/. People can also sign up for emergency alerts through the county’s CodeRED system at www.co.madison.il.us/.